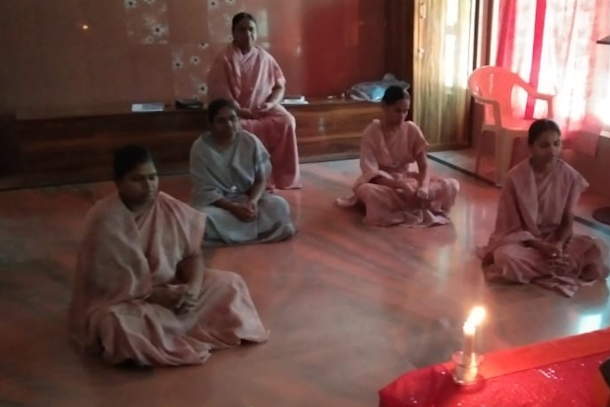 Catholic nuns pray in a convent in Madhya Pradesh state on May 31 as part of a unique ecumenical prayer program in pandemic-hit India. Christians cutting across denominational lines joined the event. (Photo supplied)

Indian Christians rang bells, sang hymns and prayed together at noon on May 31 in a unique program seeking divine assistance for their country to fight spiraling pandemic infections.

Leaders of Catholic, Protestant, Orthodox and neo-Christian churches jointly dedicated the Sunday of Pentecost to "ring, sing and pray" for India, where infections are increasing by thousands daily.

India added more than 50,000 cases in the past week to record 191,000 cases and some 5,400 deaths as of May 31. With daily infections increasing to more than 7,000 and the government relaxing lockdown norms, experts expect the contagion to spread further.

"We are united in one accord and united in faith," said Cardinal Oswald Gracias of Mumbai, president of the Catholic Bishops' Conference of India, as he urged Christians to pray for the nation.

The United Christian Forum, an ecumenical group, organized the prayer program. It sent out a video of Christian leaders encouraging their people to conduct the prayer in their homes and parishes throughout the country.

Several bishops supported the program, including Archbishop Leo Cornelio of Bhopal, based in the capital of central India's Madhya Pradesh state.

All the Catholic parishes in Bhopal Archdiocese held prayers at noon as planned, while Archbishop Cornelio also led an online prayer service for Catholics to attend from their homes, said archdiocesan spokesperson Father Maria Stephen.

Christians across India sang an invocation of the Holy Spirit and rang the bell at noon as an expression of their unity in facing the pandemic and praying to seek divine protection, organizers said.

The feast of Pentecost, observed on the seventh Sunday after Easter, commemorates the Christian belief that the spirit of God descended on the disciples of Christ while they gathered in Jerusalem.

The prayers in Catholic parishes began with invoking the Holy Spirit, seeking forgiveness of sins and an invocation to bless the country to help fight the pandemic. Thank you. You are now signed up to Daily newsletter
The prayers also included an intercessory prayer for the country, its police officials, doctors and health workers, and pandemic victims, Father Stephen said. Archbishop Cornelio told UCA News that it was "a prayer of hope at the time everyone in the country is struggling with no immediate respite from the pandemic that continues to spread among the masses."Pastor Vinu Paul, who leads New Frontier Church based in the western state of Maharashtra, said people in his church "prayed together for the healing of our land."Bishop Chacko Thottumarickal of Indore also exhorted Christians to seek God's help to save the country from coronavirus."When we all pray together, God will send his Holy Spirit and deliver the nation" of 1.3 billion people, the prelate said.Christians were asked to follow the Covid-19 lockdown restrictions during the prayer programs."We abide by the law of the land, and we bring our voices, our prayers and ring the church bell to resonate the sound of hope to every corner of our nation, as per the directives in place," said a statement issued by organizers in Indore.