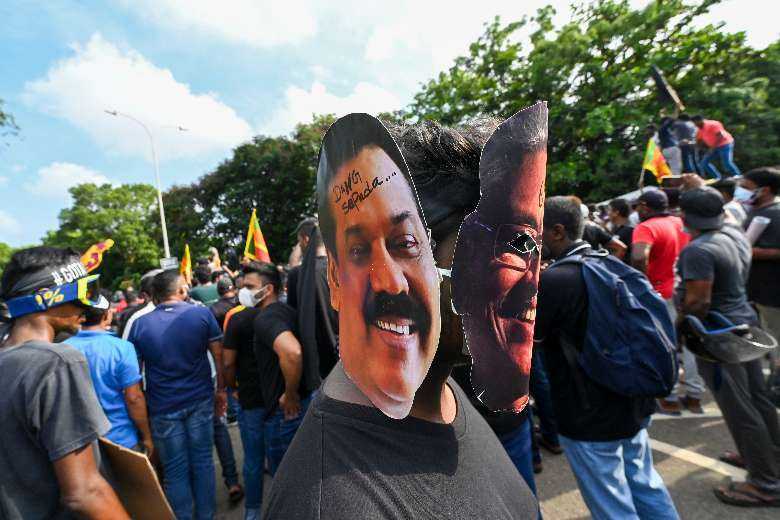 A Sri Lankan demonstrator wearing the masks of President Gotabaya Rajapaksa and Prime Minister Mahinda Rajapaksa at a demonstration demanding their resignation over the country's crippling economic crisis, near the parliament building in Colombo on May 6. (Photo: AFP)

Sri Lankan Christians closed their schools and other institutions to join a nationwide strike against President Gotabaya Rajapaksha and his government’s mishandling of the ongoing financial crisis.

Educational institutions, offices, factories, electricity, health services, public and private transport remained closed on May 6 in response to a strike call given by trade unions and civil society organizations.

Police fired tear gas to disperse university students near the parliament building in Colombo even as the president invoked emergency laws to ensure public order as the strike brought the nation of 22 million people to a standstill after months of unrest.

Many Christian churches and Buddhist temples rang bells in support of the strike, one of the largest since 1953, that has affected the island nation.

“Everyone is vehemently opposing the corrupt regime,” said Father Amila Jeevantha Peiris, a Catholic priest who has been part of the street protests for more than three weeks.

“Raise a black flag on every house,” Father Peiris appealed while speaking to UCA News.

“It is clear that there is a rejection of nepotistic family politics, corruption and the attitude of impunity towards the burning issues that our people are forced to struggle with on a daily basis”

Many Christian priests and nuns have joined young protesters who have lodged themselves in front of the presidential secretariat in Colombo.

“It is clear that there is a rejection of nepotistic family politics, corruption and the attitude of impunity towards the burning issues that our people are forced to struggle with on a daily basis,” said bishops from the Church of Ceylon (Anglican Church).

Bishop Keerthisiri Fernando and Bishop Dushantha Rodrigo in a statement on May 5 said they have joined “the ongoing people's struggle and call on those responsible to step down.”

They further condemned the recent arrests of a group of youths engaged in peaceful protests. “Such arbitrary arrests and unlawful actions by law enforcement are a blatant violation of the fundamental rights of our people,” the bishops added.

Meanwhile, an appeal was issued to religious leaders to come out in support and protect the youngsters holding protests near the parliament since May 4.

Anti-government protests erupted across the island nation in early March as the worst economic crisis in decades unfolded.

Protesters accuse the government of mismanaging the economy and creating a foreign exchange crisis that has led to shortages of essentials.

The country's external debt is estimated to be around US$51 billion and the government is heavily borrowing from China. It has also banned many imports to halt outflows of foreign currency.

The financial crisis has led to shortages of fuel, food and medicines among other essentials, resulting in repeated blackouts and increasing hardships for the island’s population.

Protesters have set up temporary camps with food, water and toilet facilities besides a makeshift medical facility in the open space opposite the presidential secretariat.