Christians in their thousands flee terror in Iraq 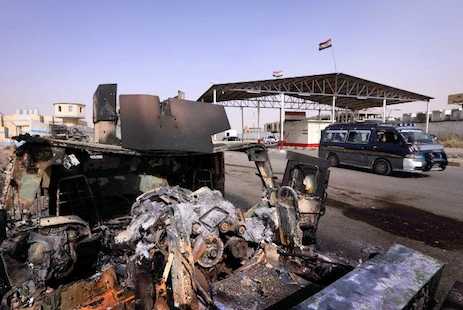 The news of a church under construction which exploded east of Mosul is already on social networks. Together with the news that the monastery of Mar Behnam - dating back to the fourth century, one of the most important historical sites of Assyrian Christianity – is in the hands of militants of the Islamic State of Iraq and the Levant since yesterday, after taking control of Iraq's second city.

Many question marks are also concentrated on the fate of the churches in Mosul itself, hastily abandoned by the clergy and the faithful who, despite all the suffering experienced by Iraq over the last decade, had always had the courage to remain.  Now, they too are among the hundreds of thousands of refugees fleeing towards Kurdistan.

With the dramatic news that has been arriving from Mosul since yesterday, there is also the totally particular drama of the local Christian community, struggling with the nightmare of a jihadist militia which they know well and who have already shown  what they are capable of in the Syrian province of Raqqa.

There is an email that expresses all the drama of the climate that reigns in these hours in Northern Iraq, sent last night by a Dominican religious in Mosul to his provincial superior:

“I am writing in a critical and apocalyptic situation. The majority of the inhabitants of the city have already fled their homes and have ran away to the villages; they sleep out in the open without anything to eat and drink. Thousands of gunmen of the Islamic State of Iraq and the Levant have attacked Mosul in the past two days. They murdered adults and children. Hundreds of bodies have been left in the streets and in the homes, without any mercy.  Even the Army and the regular forces have abandoned the city, along with the governor.  From the mosques you hear the cry: “Allah Akhbar, long live the Islamic state”.

From the message you can imagine that even in Qaraqosh - the most important town of the plain of Nineveh, where in recent years many Christians had taken refuge - the situation is disturbing. A Dominican religious wrote yesterday:

"Qaraqosh is flooded with all kinds of refugees, without food or accommodation. The checkpoints and Kurdish militias are preventing many refugees from entering Kurdistan. What we are seeing and we are living in the last two days is horrible and catastrophic. The monastery of Mar Behnam and other churches have fallen into rebel hands ... and now they have arrived here and five minutes ago they entered Qaraqosh. We are surrounded and threatened with death ... Pray for us. I'm sorry but I cannot go on writing ... They’re not very far from our monastery ..."

Full Story: The new plight of Christians in Mosul