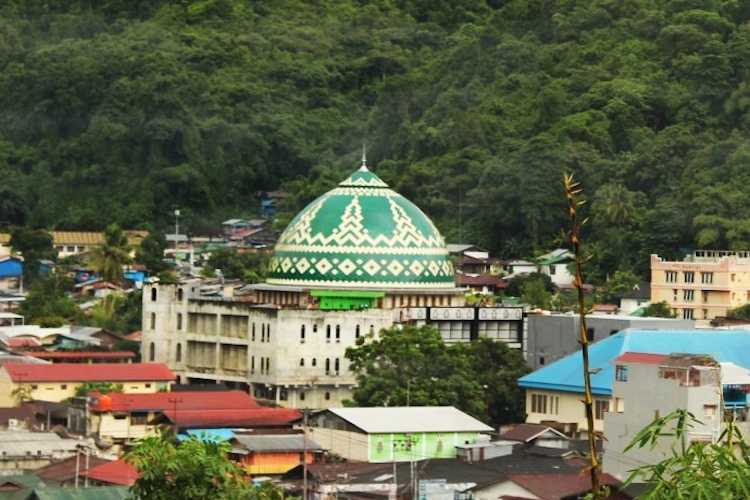 Mosques are not only built in residential areas but also in public spaces, such as the Raja Baithurahim mosque in the heart of Jayapura city, the capital of Indonesia's Papua province. (Photo by Benny Mawel/ucanews.com)

Yan Kossy has lived in Jayapura, the provincial capital of Papua, for many years without being disturbed by the influx of outsiders but he said he finds the recent accumulation of mosques in the surrounding area unsettling.

For example, Muslims recently built an Islamic center and cemetery on a ground higher than where people have lived and sources of water for thousands of years.

Some have taken it as a sign of disrespect and a bid to show the superiority of their religion while others fret about the environmental impact it could wreak.

"The cemetery could contaminate our drinking water," Kossy said.

Christians were further antagonized when the road to a popular Christian shrine was damaged during the construction of Islamic buildings in the area.

Meanwhile, after the Islamic center was built another problem arose: the loud sound from nearby mosques as they made their calls to prayer.

Marianus Yaung, a resident of Jayapura District, said Muslims who have come to the region often fail to respect the rites or ways of local people.

"They come and build whatever they want," Yaung told ucanews.com, citing the construction of the controversial Al Agshan mosque in Sentani.

The mosque was built higher than church buildings in the surrounding area, causing Christians to protest.

"They should have discussed their plan first with local people. But they didn't, which has been interpreted as a sign of disrespect," Yaung said. The construction of a minaret at Al-Aqsha mosque in Sentani, the capital of Jayapura district in Indonesia's Papua province, has caused controversy as it is taller than church buildings in the area. (Photo by Benny Mawel/ucanews.com)

Dominikus Surabut, a tribal leader in Papua, said everyone has the right to practice their faith and develop their religion.

However the growing Muslim presence in the area, coupled with their recent behavior, is becoming problematic as it also provides room for the spread of radicalism, he added.

A number of radicalized Muslim groups have gained ground in Papua, he said, citing the existence and influence of Hizb ut-Tahrir, based in Keerom District in northern Papua. It controls 500 hectares of land and centralizes all of its activities there.

Surabut said he has also heard rumors about the presence of Jamaah Islamiah in Merauke, southern Papua, which has set off more alarm bells among local people.

"We are more concerned about the presence of Hizb ut-Tahrir [a pan-Islamic group] in Keerom because we know some of their members have received military training," he added.

The government banned the group last year but it remains active in the country with considerable influence.

The threat to Christians and clergymen because more evident recently after Muslim cleric Fadzlan Garamatan accused missionaries of misleading the public.

In a video that was circulated in March, Garamatan blamed European missionaries for the excessive amounts of alcohol being imbibed by Papuans.

He also accused them of bathing members of the public in pork fat in adherence to bizarre cultural traditions.

According to Islamic teachings the consumption of pork is forbidden because Muslims believe the meat and fat of a pig absorbs toxins and can be 30 times more toxic than beef.

Some mosques, like the one pictured, have even been built inside military compounds. (ucanews.com photo)

Papuan Christians denounced such accusations and reported the cleric to the police on March 26.

Rev. John Bangsano, who coordinated the Ecumenism Movement of Churches in Papua, said Garamatan insulted European missionaries and insulted the country as a whole with such unfounded remarks, which appeared to be aimed at fomenting unrest.

"He has indicted the Papua people as a whole," he said, adding Garamatan has set up numerous social media accounts in a bid to discredit and humiliate missionaries and Papuans alike.

"We oppose such hate speech. It destroys the sense of social harmony that has been well-established in Papua between Christians and Muslims long before he came along," he said.

Father John Djongga challenged the cleric and said his accusations were baseless.

"If he has any evidence to back them up he should be able to show who the missionaries are and identify where they are located," said the Catholic priest.

As of late April, the case remains under police investigation.

Boy Rafli Amar, the nation's police chief, said the police are taking the case seriously and branching out to track to cleric down.

"We are coordinating with the directorate of cybercrime in Jakarta because it is possible the cleric is not in Papua," he said.

Franciscan Father Konstantinus Bahang said the reactions of Christians to Islam of late have been fueled by both fear and, increasingly, loathing.

Their fear stems from the growing domination of Islam in all spheres of life, particularly the economy as Muslims open more businesses that further ramp up competition.

"Most of the people who are well-connected and who are prospering are Muslims, while Papuans are getting left out," said Father Bahang, a lecturer at the Fajar Timur College of Philosophy of Theology in Jayapura.

"These are public service spaces for Christians and Muslims alike, but now Muslims control them," he added.

Jayapura city now has over 80 mosques and mushollas (mosque-like prayer rooms) built in or near local markets, residential areas and government offices.

The neighboring district of Sentani has 24 mosques while Jayapura District has 52.

From the perspective of religious psychology, this mushrooming presence can be seen as a bid to try and marginalize other people's religious beliefs, Father Bahang said.

Papua has a population of about 3.6 million people, of which 61.3 percent are Protestants, 21 percent are Catholics and 17.4 percent are Muslims.

Father Bahang said many indigenous children are already being educated or groomed to serve as the next leaders of Islam in the region.

"These children will some day have to face their own people," he said.

He sees this as a deliberate attempt to sabotage the church by weakening its influence.

"The good thing is that, despite the differences, the sense of solidarity among Christians remains ironclad," he said.

Many people in Papua have still not cottoned on to fact that the growing presence of Islam represents a potential political threat.

He said if tensions boil over the results could be disastrous and conflict could escalate quickly.

"All parties need to work together to find solutions before that happens," Father Bahang said.

He suggested the authorities prepare a regulation specific to the region to control interreligious tolerance in Papua, in accordance with the Special Autonomy Law.

Religious leaders also need to work on building dialogue to preempt further problems and involve people at a grassroots level, he added.

When asked to comment on this issue, Saiful Islami Al Payage, chairman of the Papua chapter of the Indonesian Ulema Council, said that "all of these things need to discussed internally."