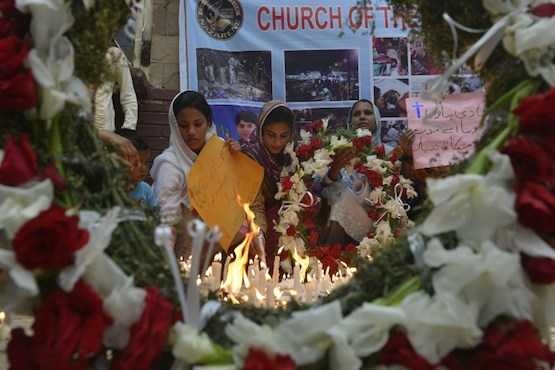 Pakistani Christians light candles during a April 3 vigil to pay tribute to the victims of a suicide bombing in a Lahore park crowded with families celebrating Easter. (Photo by AFP)

The Catholic’ Church’s Justice and Peace Commission in Pakistan is urging the government to ensure the protection of religious minorities following a series of recent incidents that it says shows a biased mindset against Christians.

"It is the responsibility of government to ensure protection of people especially vulnerable religious minorities," said Cecil Chaudhry, the commission’s executive director.

"But police behavior shows a biased mindset. Strong action is needed to guarantee the rights of people and hold the culprits accountable," he told ucanews.com.

Sunday worship was interrupted at United Church in Fazlia Colony, a mixed neighborhood of Muslims and Christians, when a police constable entered the building and slapped Pastor Riaz Rehmat in front of his congregation of 150, according to witnesses.

Police received a complaint from a neighbor over the emergency helpline after being disturbed by loudspeakers in the church.

Pastor Rehmat, who lives above the church with his wife and three children, says he is worried. "At night, I feel someone will climb the church stairs and kill us ... I can’t sleep anymore."

Workers of the justice and peace commission are interviewing locals from Fazlia Colony, home to about 500 Christians, to help ease tensions.

In nearby Kasur district, a Christian ice-cream seller was attacked on May 17. Khaleel Masih told ucanews.com that he was set upon by a mob of around 20 for selling ice cream to Muslim children.

Masih is presently suffering from internal injures. "It is hard to eat," he told ucanews.com. "They punched me, hit me on the back of my neck and kicked me in the ribs."

Christians in Pakistan, a website highlighting the persecution of the minority community, reported that the mob called Christians "untouchables" and said they should not be allowed to sell food to Muslims.

Both incidents followed a shooting earlier this month when a gunmen opened fire at the main door of St. Joseph Catholic Church in Lahore.

Attacks on Christians, who make up 2 percent of the Muslim-majority population, are on the increase according to Sherry Rehman a member of Pakistan's Senate and the vice president of the opposition Pakistan Peoples Party.

"Minority persecution is on the rise in all parts of Pakistan," Rehman said. "In part because many incidents are being ignored." She went on to recall the Easter Sunday Gulshan-e-Iqbal Park bomb blast in Lahore on March 26 in which more than 70 people were killed, at least 29 of them children.

"We all have a long way to go in building equality," she said. "Pakistan cannot continue to tolerate continual religious persecution of its minorities."