Christians in Korea call for unity, pray for peace

Catholics, Protestants have more in common than differences," says bishop 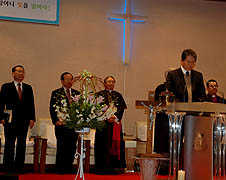 Christian leaders during the ecumenical service

Christians of many denominations in South Korea have held a special service as part of the annual Week of Prayer for Christian Unity in which they called for peace at home and abroad. The Ecumenical Worship service was held in a Salvation Army church in Seoul and attended by some 250 Christians. "Rather than blaming others for divisions, we should repent and ask God for forgiveness. We should realize we have much more in common rather than differences," said Archbishop Hyginus Kim Hee-joong of Kwangju in his homily. “We should follow the role model of early apostles and share our faith with our neighbors," commented the president of the Korean bishops’ Committee for Promoting Christian Unity and Inter-religious Dialogue. For this year’s prayer service, Christian leaders in Jerusalem prepared special prayers for peace in the holy city. Archbishop Kim said, "It is shameful that Jerusalem, the center for Christians, Jews and Muslims whose core teachings are peace, remains a powder keg." Reverend Kim Young-joo, secretary of the National Council of Churches in Korea, said: "Today, we miss peace most. The struggles between North and South Korea are getting worse and those between man and nature are becoming serious because of the government’s rivers project," referring to the Seoul administration’s controversial Four Rivers restoration plan which has attracted fierce criticism from church and lay organizations. The Church celebrates the Week of Prayer for Christian Unity, an annual eight-day period observed from Jan. 18 to Jan. 25. At this time, Christians of various Churches come together to pray for the restoration of full unity among all Christian peoples. Related report Christians Pray For Unity Among Divided Koreans KO12994.1638