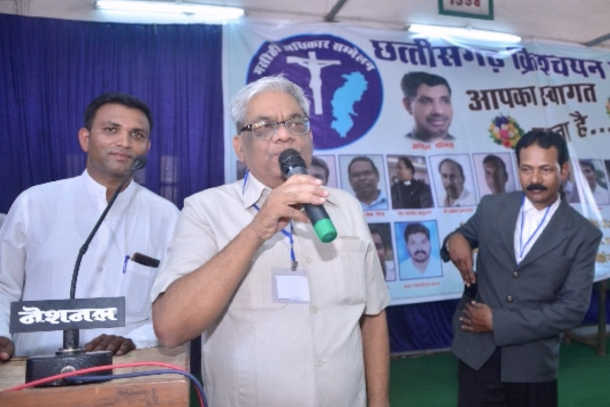 Arun Pannalal, president of the ecumenical Chhattisgarh Christian Forum, addresses a gathering on Oct. 21 in state capital Raipur. The forum has presented a set of demands to political parties seeking to end violence against Christians. (Photo provided)

Christian leaders in India's poll-bound Chhattisgarh state have presented a charter of demands to major political parties seeking to end discrimination and violence.

The charter prepared by leaders of the ecumenical Chhattisgarh Christian Forum expressed concerns over the security of the miniscule Christian community in the central state, now ruled by the pro-Hindu Bharatiya Janata Party (BJP).

It also calls on the next government to ensure freedom to practice religion.

"We have already handed over the charter to all major political parties," Arun Pannalal, president of the forum, told ucanews.com on Nov. 7.

The state of 25 million people, where Christians make up barely 2 percent of the population, is scheduled to elect its 90-seat legislative house in two phases on Nov. 12 and Nov. 20.

Prime Minister Narendra Modi's BJP, which has ruled the state for 15 years, is aiming to prevent the Indian National Congress party, its archrival, from gaining power. The smaller Bahujan Samaj Party and Aam Aadmi Party are also in the fray.

Pannalal told ucanews.com that all parties except the BJP have responded favorably to the forum's demands.

The charter of demands includes withdrawal of more than 400 "fake" land-related cases and "bogus" conversion charges filed against Christians in Chhattisgarh.

It also wants adequate representation for Christians in the state's Minorities Commission and its subcommittees, scholarships and grants for needy Christian students and an end to discrimination against Christians in government jobs.

"Christians are often denied government jobs and other benefits for being Christian," said Ankush Baryekar, the forum's general secretary.

Chhattisgarh has witnessed the destruction of churches, attacks on pastors and bans on Christian prayers and gatherings in villages. Hindu groups also file false cases accusing Christians of violating a stringent anti-conversion law.

Bishop Paul Toppo of Raigarh welcomed the forum's charter. "It is good to inform political leaders about our grievances ahead of the polls. It helps political parties to take proactive steps when they form the government," he told ucanews.com.

Father Sebastian Poomattam, vicar general of Raipur, told ucanews.com that the major problem came from the administration. "No doubt we face persecution. The entire administration, especially the police force, has become biased against Christians and this is a cause of major worry," said the priest, also the diocesan spokesperson.

Even though Christians are victims of violence, police tend to book them under various charges of conversion and offending the religious feelings of Hindus, Father Poomattam said.

Four other states face elections this year. They are Christian-dominated Mizoram in the northeast, Telangana in the south, Madhya Pradesh in central India and Rajasthan in the west.