People might be influenced by Hinduism if they practiced yoga, says pastor in northeastern India's Mizoram state 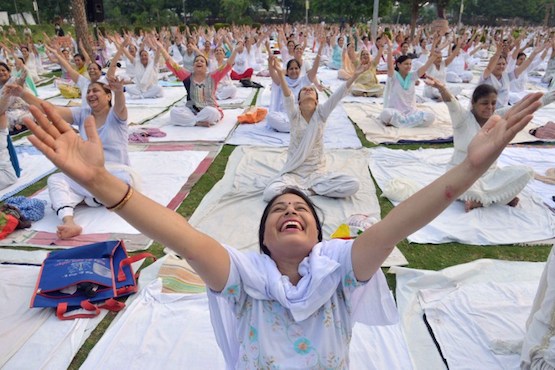 Indian yoga practioneers take part in a yoga session on International Yoga Day in Amritsar on June 21. (Photo by AFP)

On International Yoga Day, Christian denominations in the northeastern state of Mizoram have called for Christians to abstain from the ancient Indian physical, mental, and spiritual discipline because it is related to "Hindu culture."

The Mizoram Kohhran Hruaitute Committee, that includes members from the Presbyterian Church, the Catholic Church, The Salvation Army and Baptist Church, called on its members to refrain from practicing Yoga.

"We did not observe the day because we are Christians and yoga is from the Hindu religion," the Rev. P. C. Pachhunga, executive secretary of the Mizoram Presbyterian Church Synod, told ucanews.com.

The synod has around 1,000 local churches across the state. More than 85 percent of people in tribal-dominated Mizoram are Christians, mostly Presbyterians.

"People might be influenced by Hinduism if they practiced yoga," the Rev.  Pachhunga said. "And they might start moving away from Christianity."

Since then thousands of students, elderly, youth and women take part in public yoga sessions across the country on this date, with preparations for the event running for over two weeks.

Father James Zodinliana, director of youth in the state's Aizawl Diocese voiced fears that the government has a hidden agenda behind promoting yoga. "They are slowly trying to make us Hindus by influencing us through yoga," he said.

India is ruled by the pro-Hindu Bharatiya Janata Party and is often accused of pushing a Hindu agenda. Indian religious get tips on ways to observe Year of Mercy

The priest said that yoga is good for a person's health "but if we delve into its history and roots" it's steeped in Hindu religious philosophy.

"We cannot do yoga to attain salvation or eternal peace," he said. "Jesus is already giving us that. We don't have to follow any extra practice."

Last year's Yoga Day also ran into problems when some Muslims protested against chanting the word "om" which Hindus believe to be the sacred sound of creation.

Yoga, meaning "union" in Sanskrit, denotes harmony and perfection in whatever one does. The ascetic Indian discipline aims to achieve liberation of self and union with a higher power through intense concentration and deep meditation. Among its methods are "asanas" (prescribed postures) and controlled breathing.