Christians, Hindus 'can bring hope to those in despair'

Diwali is a festival focusing on the victory of truth over lies, light over darkness, life over death and good over evil 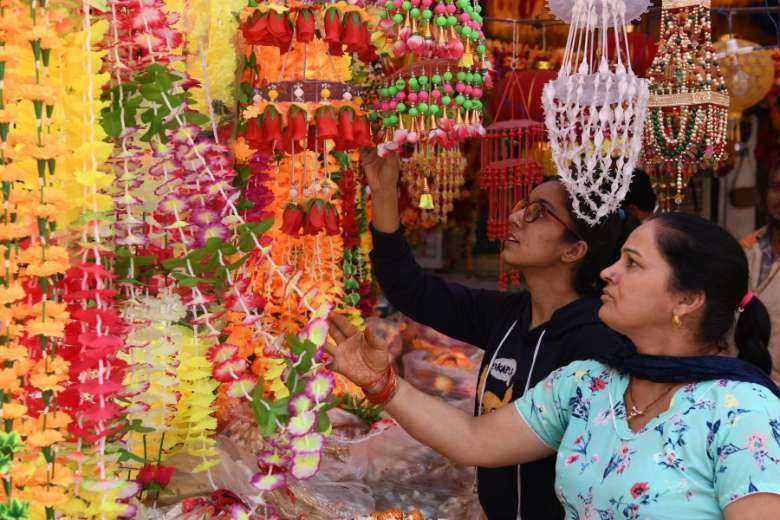 People buy decoration items ahead of the Hindu festival of Diwali at a market in Amritsar, India. (Photo: AFP)

As the world continues to deal with the coronavirus pandemic, Christians, Hindus and people belonging to other religious traditions can come together to bring hope to those who suffer, said the top officials of the Pontifical Council for Interreligious Dialogue.

"The power of solidarity unleashed in alleviating the suffering and assisting the needy, more so with an interreligious character and responsibility, gives visibility to the light of hope by putting in evidence the response which adherents of all religious traditions are called upon to make in times of despair and darkness," the council said in a message marking the Hindu celebration of Diwali.

Diwali is a festival focusing on the victory of truth over lies, light over darkness, life over death and good over evil. The Vatican released its 2021 message to Hindus Oct. 29 ahead of the festival that begins Nov. 4 in most countries. The message was signed by Cardinal Miguel Ayuso Guixot, council president, and Msgr. Indunil Janakaratne Kodithuwakku, council secretary.

The Vatican officials expressed their hope that the observance of Diwali may bring hope to Hindus around the world, "even in the midst of anxiety and uncertainty arising from the present pandemic, and its resultant worldwide crises."

In addition to the pandemic, which has "upended the lives and livelihood of people," they said, most people can experience "a sense of resignation, despair and despondency whenever devastating things happen across the globe caused by factors ranging from terrorism to ecological degradation."

"These not only instill fear in people but also add to their distress and despair," the message said.

However, the Vatican officials said, in trying times, the teachings and traditions of Christianity and Hinduism "can bring the light of hope in people's lives."

"In times of crisis, while religious traditions -- as repositories of centuries of wisdom -- have the power of lifting our sagging spirits, they also have the capacity to help individuals and communities to reset their life's compass with hope, with their gaze fixed beyond their present despair," the message said.

The Vatican officials called for religious and community leaders to nurture fraternity and solidarity among their followers, which will ensure "comfort to the afflicted and hope to the distressed."

"As believers grounded in our own respective religious traditions and as persons with shared vision for and shared responsibility towards humanity, in particular the suffering humanity, may we Christians and Hindus, individually and collectively, and joining hands with people of other religious traditions and of good will, reach out to people who are in despair, to bring light into their lives," the message said.