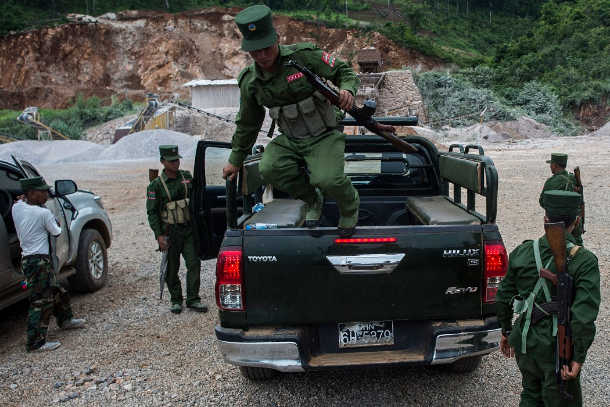 A member of the United Wa State Army jumps from a vehicle in Myanmar's Shan State in this photo taken June 26, 2017. Forty one male and female Bible school students have recently been forced to join the UWSA, according to a Protestant preacher. (Photo by Ye Aung Thu/AFP)

Ethnic-minority Wa and Lahu Christians near Myanmar's border with China were detained and ordered by an China-backed militia group to pledge that they would pray only privately in their homes and not in churches.

However, he said 92 ethnic-Lahu Christians were still held by the United Wa State Army (UWSA).

Rev. Lazarus told ucanews.com that he had come to believe that Lahu Christians would have no other choice than to also sign the document setting out the worship restrictions.

The Lahu Baptist Convention has sent a letter to the UWSA, but has had no reply.

"Christians will face more restrictions and be closely monitored by the United Wa State Army, so the situation is worrisome," said the outspoken Christian leader.

Ninety-two pastors had been detained, five churches destroyed and 52 churches shut down

And 41 male and female students who were studying in Bible schools had been forcibly recruited by the UWSA, according to Rev. Lazarus.

Rev. Thang Cin Lian, general secretary of the Myanmar Baptist Convention, said it has held meetings on the issue, but declined to provide detailed information.

"We are praying for the Christians in the Wa Hills," Rev. Lian told ucanews.com.

Five Catholic nuns and six lay teachers were expelled from the UWSA in late September as part of a campaign in which the militant group, that grew out of the Communist Party of Burma, has destroyed unauthorized churches in the region since Sept. 13.

The UWSA has announced that all churches built after 1992 were illegally constructed and will be destroyed.

Only churches built between 1989 and 1992 have been deemed to be legal.

The UWSA has banned the construction of new churches and requires that priests and workers in churches be locals, not outsiders.

It has also banned religious teaching in schools in the Wa region, while UWSA functionaries have been forbidden from being members of any religious organization.

The Wa region is home to ethnic groups including the Wa, Kachin, Ta'ang, Lahu, Lisu, Kokang and Shan who observe the faiths of Christianity, Buddhism, animism, spirit worship and Islam.

Christians comprise around 30 percent of the estimated 450,000 ethnic Wa.

The 30,000-strong UWSA — Myanmar's largest ethnic army — is also understood to be one of the largest drug-trafficking groups in the Southeast Asian region.