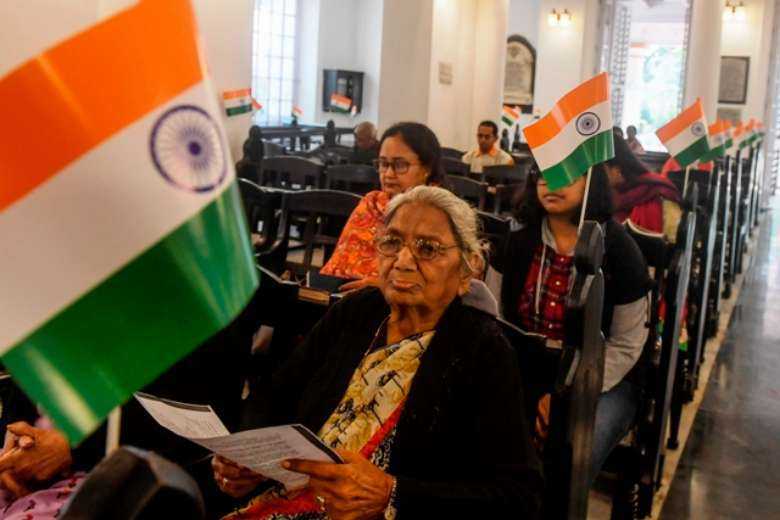 Christians participate in a special 'Prayer for our Country' to celebrate Republic Day at the Union Chapel in Kolkata on January 26, 2020. (Photo: AFP)

“The Christian community feels betrayed when its sentiments are not taken note of and its selfless services in the fields of education, healthcare and other social areas for the welfare of all communities are not taken into consideration,” Archbishop Machado said in a May 18 statement.

The prelates' statement came a day after the state government, run by the pro-Hindu Bharatiya Janata Party (BJP), promulgated the ordinance on May 17 with the signature of the state governor.

The Karnataka Right to Freedom of Religion Bill 2021 was passed by the state legislative assembly last December but the ruling BJP failed to muster enough support in the legislative council or upper house, whose final sanction is required for any law to come into force.

The BJP-led government then decided on taking the ordinance route to implement the anti-conversion law.

Archbishop Machado, who heads the state's bishops' council, called the move “a big letdown” that “was deeply hurting and disturbing” for Christians in the state.

He said Christians had repeatedly drawn the attention of the state government and members of the public to the fact that the law “was irrelevant and malicious” and “only aimed at dividing the Christians from other religious minorities.”

He said a Christian delegation under his leadership also called on Governor Thawarchand Gehlot a day before he signed the ordinance and appealed to him not to allow the law through the backdoor.

“Unfortunately, our request was not honored and considered favorably,” Archbishop Machado said.

“It is a well-known fact that the Christian Community is always a law-abiding and peace-loving community, and it will pursue the options available to it to democratically ensure that this law will not come into force.”

The prelate told UCA News that the community was considering legal remedies  even while Karnataka Home Minister Araga Jnanendra tried to allay the fears saying, “the ordinance does not contain any provision that would curtail religious rights.”

“The anti-conversion law has not been drafted to target any one religion. It seeks to prohibit religious conversion by way of inducements or force,” the minister added.

The law prescribes imprisonment of three to five years along with a fine ranging from Indian rupees 25,000 to 100,000 (US$330-1,330)) for forced conversion due to “force, undue influence, coercion, allurement or by any fraudulent means” or “by a promise of marriage.”

Anyone wanting to change religion will have to file a declaration before government authorities at least 30 days in advance, citing the reasons for the decision.

The law further prohibits inter-religious marriage. “Any marriage which has happened with the sole purpose of unlawful conversion or vice-versa by the man of one religion with the woman of another religion either by converting himself before or after marriage or by converting the woman before or after marriage shall be declared as null and void,” it states.

Father Cedric Prakash, a Jesuit human rights activist based in the western Indian state of Gujarat, said the law violates "Article 25 of the Indian Constitution [that guarantees the freedom to profess, practice and propagate religion to all citizens].”

“The law can now punish a Christian or a Muslim for a simple humanitarian act like providing alms or other help such as free education to a child from a poor Hindu family, calling it an attempt to convert,” the priest added.

The Religious Liberty Commission of the Evangelical Fellowship of India (EFI) in its fact-finding report released in December 2021 had termed Karnataka as one of the most dangerous states for Christians in southern India.

SEBASTIAN
A friend who's currently on a visit to the US said there were 10 immigration counters at the LA airpot, but the lines were so long it took hrs to reach the counter. Most of the NRIs in countries like US are Hindus, who settle there and benefit from a system set up by Christians. Irony is that in India they try to cause pain and hardship to Christian community, back home. Hypocrisy at it's best. May better sense prevail, among the majority community.c
Reply