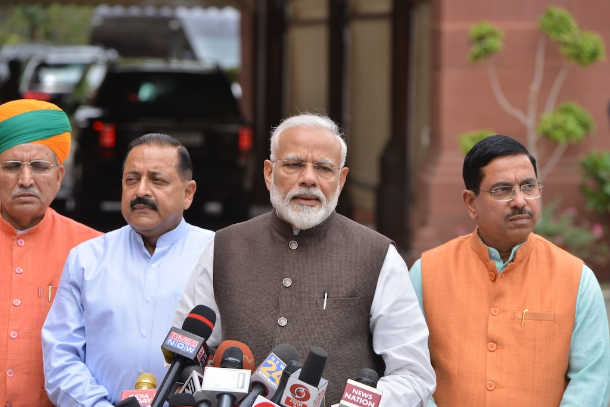 Indian Prime Minister Narendra Modi (center) talks to the media on his arrival at parliament in New Delhi on June 17. His government has been accused of turning a blind eye to attacks on Christians by Hindu groups. (IANS photo)

With Prime Minister Narendra Modi starting his second term after leading his pro-Hindu Bharatiya Janata Party (BJP) to victory in India’s recent election, complaints of violence are growing from the country’s persecuted Christians.

Christians face a new wave of threats from Hindu groups after the BJP retained its grip on power in May.

“A second term for the BJP has for sure boosted the morale of Hindu groups, who keep threatening and intimidating minorities for being non-Hindus in India, which they think belongs to Hindus only,” Christian leader A.C. Michael, an official of the Indian chapter of the Alliance Defending Freedom, told ucanews.com.

The BJP won 303 seats in the 545-seat parliament in a landslide victory in the April-May national election following the completion of Modi’s first term that began in May 2014.

On May 30, as Modi was taking his oath as prime minister, police in the northern state of Uttar Pradesh detained Pastor Roopsen Paswan of the Assemblies of Believers Church in Rai Bareli district.

He was arrested on charges of continuing an assembly after it was commanded to disperse. Church officials said he was released on bail the same day but was warned of dire consequences if he continued to hold church services in the district.

On June 2, Hindu groups ordered pastors in Jagannath Nagar in Maharashtra not to hold any Sunday prayer services. The pastors were threatened with violence if they refused.

A pastor and his wife were abducted by a mob of 150 Hindu activists who entered a church during Sunday prayers in the Moradabad area of Uttar Pradesh. They were later released after the intervention of village elders but were warned not to hold prayers there again.

“These are not isolated incidents but part of a great game by extremist Hindu groups to terrify minorities, particularly Christians, and render them as second-class citizens,” said Peter Sony, a social activist based in New Delhi.

“They believe Christians and Muslims aren’t Indians but foreign settlers who should be shown their real place.”

Concerns are growing that India’s secular constitution may be changed to establish a Hindu hegemony, Sony said.

Hindu groups supporting the BJP have been promoting claims that India is the land of Hindus and religious minorities should accept Hindu dominance if they want to live there.

Open Doors, an international group monitoring religious freedom, ranks India as the 10th most dangerous country for Christians to live in.

Patsy David, a senior member of the Alliance Defending Freedom, said the government remains apathetic towards Hindu attacks on Christians because it supports the idea of making India a Hindu-only nation.

“If any Christian house is attacked by a Hindu mob and the case is reported, the police arrest the complainants and even threaten them to leave the village. This has happened on scores of occasions,” he said.

David said many Christians are socially isolated in villages, with people not even allowing them to use health centers or share water from the village source.

Allen Brooks, a Christian leader based in Assam state in eastern India, said the denial of justice to Christians is specifically witnessed in the states ruled by the BJP. Police and civil administration, as well as laws, are used against Christians in a meticulous manner, he said.

“Intimidation and threats against Christians have become the new normal. Laws, police and investigations are employed to harass Christians,” Brooks said.

The arrest of a Missionaries of Charity nun on allegations of selling babies and the ongoing investigations against her congregation to find out if they used funds for religious conversion are examples of such harassment, he said.

Brooks said even Christian hospitals and schools are not spared allegations of violating the anti-conversion laws that exist in seven Indian states.

Despite allegations of conversion, no Christian has been convicted of such a crime and the Christian population of India has remained less than 3 percent throughout history, Christian leaders say.

India’s latest census of 2011 showed that Hindus formed 966 million or 80 percent of India's population of 1.3 billion. Muslims accounted for 172 million or 14 percent, while Christians comprised 29 million or 2.3 percent.