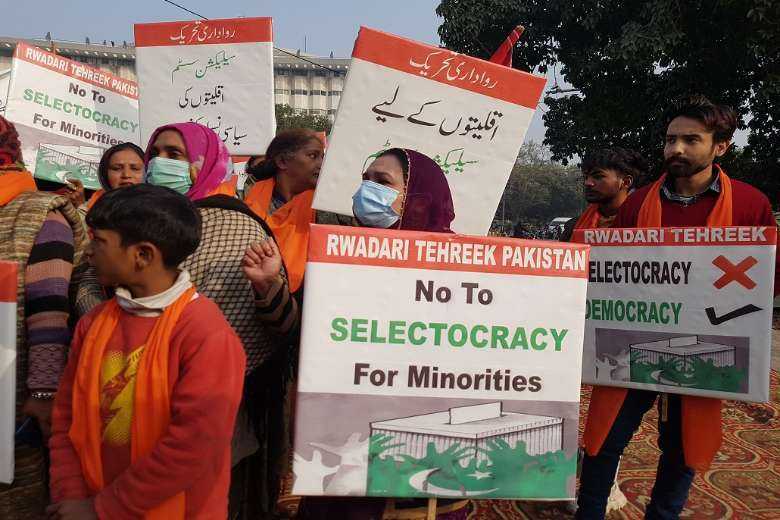 Activists of Rwadari Tehreek protest against the selection system for minority parliamentarians outside the Punjab Assembly on Jan. 14. (Photo: Kamran Chaudhry/UCA News)

With the 2023 election looming, Christian leaders in Pakistan are demanding reserved constituencies for religious minorities and the right to direct voting to help improve the political footing of Christians and Hindus in the Islamic country.

Some 300 Christians joined a Jan. 14 protest in front of the Punjab Assembly in Lahore seeking to change the current electoral system that allows elected parliamentarians to select representatives of religious minorities.

“We reject the selection system,” chanted the protesters amid clap beats.

The current electoral system allows Christians and Hindus to elect local representatives. But from among those representatives, Muslim political parties select minority parliamentarians according to the proportion of general seats they have bagged in the elections. The party winning less than 5 percent of the general seats does not have this right.

“Selecto-cracy is political genocide of minorities. Our community has been sentenced to a life of slavery,” said Samson Salamat, chairman of Rwadari Tehreek, which organized the protest.

Salamat said the present electoral system neglects Christians politically and socially. The Christian representatives handpicked by leading Muslim political parties are unable to stand up for and protect the interests of the community,  he said.

“Christians are being killed on false allegations of blasphemy but our so-called representatives think we live in paradise. They become dumb when it comes to highlighting our challenges like forced conversions,” he said.

“Government advertisements continue to reserve sweeper jobs only for Christians. Despite completing several terms, Christian lawmakers do not address such issues or do anything to promote our youth in society and politics.”

The protesters wanted reserved constituencies for Christians and Hindus in areas where they dominate, allowing only religious minority candidates to contest those seats.

“That will allow religious minorities to elect their own representatives rather than dominant parties handpicking our representatives,” Salamat said.

The protesters also wanted to increase seats for religious minorities from 10 to 14 in the 342-seat national assembly. The national parliament currently has four Christian and six Hindu members.

The demographics of Pakistan have changed much in the past four decades and in 2008 parliament increased its seats to 342. If a proportional 5 percent increase was considered, religious minorities should have been given 17 seats. But the minority seats were not increased.Minority voters now account for 3.63 million or 3.5 percent of the 118 million voters in Pakistan, according to official records.Christian leaders like Salamat say that even if those numbers are followed, religious minorities should get 12 seats, which is 3.5 percent of the seats in parliament.

However, Peter Jacob, director of the Catholic-run Centre for Social Justice, defended the current system.

“The basic question is to address segregation and discrimination on the basis of religion. Separate lists and ballot boxes will bring us closer to a separate electorate,” he said.Several outspoken Christian politicians have come through the current voting system. One example is Shahbaz Bhatti, the slain Catholic federal minister for minorities, he said.If the seats are increased in line with the census, Hindus need to be allocated more seats because they are the largest minority now. But such an increase may not be acceptable to Christians, he said.

“Representation in the name of religion is basically wrong,” Jacob said.