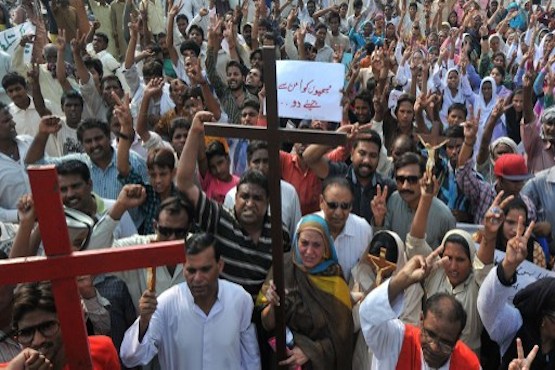 Pakistani Christian's protest in Lahore on Sept. 24, 2013, against the suicide bombing of a church in Peshawar. A devastating double suicide attack on a church in northwest Pakistan has triggered fears among the country's beleaguered Christian community that they will be targeted in a fresh wave of Islamist violence. (Photo by AFP)

Christian activists have appealed for the release of dozens of people arrested for the murder of two Muslim men mistaken as suspects in the aftermath of church bombings in Pakistan in 2015.

At least 15 people, mostly Christians, were killed and 85 injured after two bombers in March 2015 blew themselves up outside St. John Catholic Church and Christ Church in Youhanabad, an area home to more than 130,000 Christians in Lahore.

Shortly after, police detained two suspects who were forcefully taken away by rioters and beaten to death. The suspects, Babar Noman, a garment worker and Hafiz Naeem, a glass-cutter, were later cleared of involvement.

In March of this year, the anti-terrorism court brought charges against 42 Christians in what has become known as "the Youhanabad lynching case." All pleaded innocence. At the next hearing the court is likely to summon prosecution witnesses.

Sister Genevieve Ram Lal, national director of the Catholic Women's Organization, is still hopeful for the release of Christians arrested in the lynching case.

"The locals have many grievances with the justice system," said the nun who lives in Youhanabad, the largest Christian slum in Lahore. "We have been raising the issue of our sons and brothers whenever we meet Christian ministers. I hope the chief minister of Punjab province will listen to our requests. Peace will only return to the attacked Christian neighborhood after the freedom of jailed Christians."

"Now that the bread-winners are behind bars, the women of affected families have no choice but to seek jobs. The church is helping them by waiving off school fees of the children whose fathers are in jail," she said.

According to Pastor Arshad Ashknaz of Christ Church, one of the attacked churches in Youhanabad, the ruling Pakistan Muslim League party is putting pressure on the justice system to get results.

"The Christians are not terrorists, 75 percent of those arrested were not even identified in the camera which filmed the lynching incident," he said. "The police themselves caught the bomb suspects. It was all just an accident. It's been more than a year and a half and they have been punished enough." 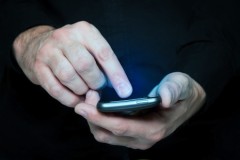 "Whenever we speak with government officials, they offer to trade the Christian prisoners with those who burnt alive a Christian couple in a brick kiln," he said.

Shama and Shahzad Masih of Kot Radha Kishan village were brutalised by a crowd of 1,500 who threw them into the burning furnace of a brick kiln for allegedly disrespecting the Quran in 2014. The anti-terrorism court charged 106 people with the murder of the Christian couple.