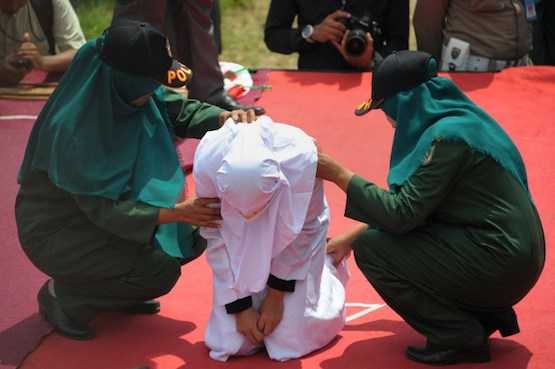 Two sharia policewomen help a woman after she received a caning for breaking Islamic law during a public punishment in Banda Aceh, Indonesia, on March 1. (Photo by AFP)

Protestant and Catholic leaders have criticized the first-ever caning of a non-Muslim in Indonesia's Aceh province.

Remita Sinaga, 60, a member of the Batak Protestant Church was publically whipped 28 times with a rattan cane in Central Aceh district on April 12.

She was found guilty by a Shariah court in Takengon, the district capital, of breaching a newly introduced Islamic criminal code or qanun hukum jinayat by selling alcohol.

She also spent 47 days in detention during the trial process.

Christian leaders have spoken out against the caning, saying Shariah does not include Christians and that the new Muslim criminal code is being used against everyone, regardless of religion.

"We don't defend her [Sinaga]. Our concern is that the law isn't in line with the national penal code. What we understood is that Shariah law is only supposed to be for Muslims," the Rev. Betty Manurung of the Batak Protestant Church in Takengon, told ucanews.com April 15.

"Information I got from an official at the court is that qanun hukum jinayat is for all people living in Aceh."

This has raised fears among Christians, she said.

Father Paulus Christian Siswantoko, executive secretary of the Catholic bishops' Commission for Justice, Peace and Pastoral for Migrant-Itinerant People, said caning should only be applied, if at all, to Muslims adhering to Islamic law.

Criticizing the Aceh government, he said all people from different religious backgrounds should be treated fairly.

"Jakarta has allowed Aceh to implement Shariah law. But never force this law down the throats of other religions," he said.

In an April 15 statement she called on the central government to review the Islamic criminal code, maintaining that "discriminative bylaws are against the constitution."

Syahrizal Abbas, head of Aceh's provincial Shariah agency, said Islamic law is principally applied only to Muslims. However, it can be applied to non-Muslims if they are caught violating it and willing to be sentenced under it.

“So if a non-Muslim is willing to be sentenced based on Shariah, then Shariah cannot refuse it,” he told ucanews.com

He said he did not know for sure whether the old woman was willing to be sentenced under Shariah.