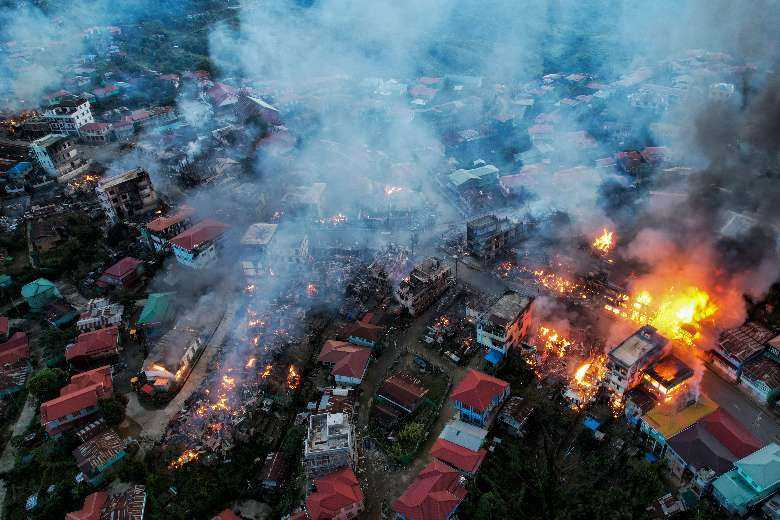 An aerial photograph of smoke and fires billowing from civilian buildings destroyed by junta troops at Thantlang in Chin state, Myanmar, on Oct. 29, 2021. (Photo: AFP)

Christians in Myanmar have borne the brunt of violence with around 75 churches being severely or partially destroyed in attacks by the junta since the military coup on Feb. 1, 2021.

Soldiers regularly raid church institutions including places of worship under the pretext of looking for suspected rebels and often resort to violent destruction.

Christian-majority Chin state in western Myanmar has had 62 religious structures destroyed — the largest number of any single state or region — including 22 that were burned to ashes and 20 more destroyed by artillery blasts, according to the Institute of Chin Affairs, a human rights organization.

Christians make up almost 90 percent of impoverished Chin state’s 478,801 people, according to the 2014 Myanmar census.

At least 8,262 houses and other civilian properties, including churches, monasteries, schools and markets, have reportedly been either burned down or destroyed in Chin and Kayah states and Sagaing and Magway regions, according to the UN Office for the Coordination of Humanitarian Affairs (OCHA).

Some 912,700 men, women and children remained displaced across the conflict-torn nation as of April 11. This includes 566,100 people displaced due to the ongoing conflict, with the northwest region accounting for over 300,000 people for the first time, according to OCHA.

Christian-majority Chin and Kayah states have been at the forefront of resistance to the junta forces and have witnessed fierce attacks by the military including airstrikes, heavy artillery and indiscriminate attacks on civilians

“Ongoing fighting in the country’s east and northwest has exacerbated the humanitarian and displacement situation,” the UN organization said in a report on April 19.

It said the use of heavy weapons including airstrikes and artillery fire, as well as landmines and the pressure of explosive remnants of war, continues to claim lives and pose risks to the safety and security of the civilian population, especially internally displaced people.

The worst attack was reported from Sacred Heart Church in Kanyantharyear, a village near Loikaw, on May 23, 2021. It left four Catholics dead and eight others wounded in artillery shelling.

Christian-majority Chin and Kayah states have been at the forefront of resistance to the junta forces and have witnessed fierce attacks by the military including airstrikes, heavy artillery and indiscriminate attacks on civilians.

At least 1,700 people have lost their lives in the military crackdown and over 13,000 people have been detained since February 2021.