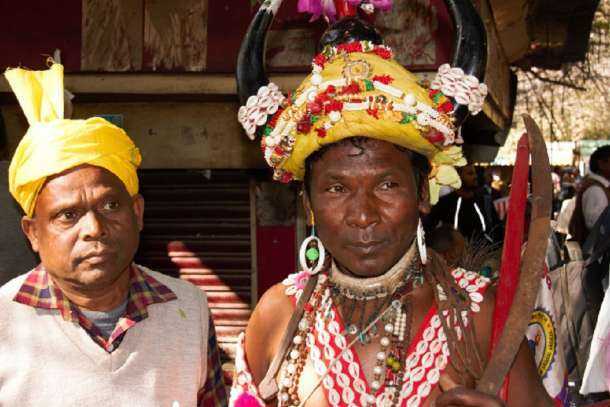 Tribal protesters in traditional head dresses gather in New Delhi in February to demand recognition of their religion in the 2021 census. (Photo: Bijay Kumar Minj/UCA News)

Christian families in the central Indian state of Chhattisgarh had their houses vandalized after refusing to follow the local Sarna religion.

“There was an incident of clashes between tribal groups and tribal Christians as the villagers wanted the Christian group to follow the traditional tribal Sarna religion of worshiping nature, which the Christian groups refused to do,” Bishop Joseph Kollamparampil of Jagdalpur told UCA News.

“The situation was quite tense as some vested interest people were trying to give it a communal color, but the administration was very alert and the situation is under control now.

“Tribals living here following the tribal Sarna religion and Christians live peacefully, and we have a very good rapport with other faiths as well as with the local administration.

“Even in our church we promote some tribal traditions and culture, but we don’t promote idol worship. The latest incident when some tribals asked Christians to worship idols is promoting tension in the villages.”

Chhattisgarh Christian Forum president Arun Pannalal said that about 2,000 villagers vandalized the houses of at least 14 Christian families. These families, with over 50 members, were being pressured to quit their faith, he alleged.

Pannalal said his forum has demanded a high-level probe and demanded compensation of 1 million rupees (US$13,560) for each of the Christian families.

However, police inspector-general P. Sundarraj said the clashes stemmed from encroachment on forest land in Kakadabeda, Singanpur and Silati villages. He said forces have been deployed in the area to prevent the situation from escalating.

Sundarraj said a few families have been following Christianity for the last six years and the villagers had some issues with the Christian families who did not follow local customs.

Reverend Vijayesh Lal, EFI general-secretary, on Sept. 28 wrote to Baghel about the attack on Christians and their houses in Kondagaon district.

Lal said that although complaints have been lodged, no action has been taken. Instead the victims are being pressured to agree to a compromise by the authorities.

He urged the chief minister to take immediate action to safeguard the constitutional right of the victims to profess and practice their faith.

EFI, founded in 1951, is a national alliance of evangelical Christians covering over 54 Protestant denominations and related congregations, over 200 church-related missions and organizations and thousands of individual members.