President and PM urged to seek release of Father Swamy, whose health is deteriorating in jail Christian leaders have appealed to the Indian president and prime minister to help end the detention of an elderly Jesuit after the priest wrote to a colleague saying that his deteriorating health has rendered him unable to eat or drink without help from jail inmates.

A delegation led by Bishop Derek Fernandes of Belgaum handed over memoranda addressed separately to President Ram Nath Kovind and Prime Minister Narendra Modi to the deputy commissioner of Belagavi (previously Belgaum) district in the southern state of Karnataka on Nov. 17.It sought the leaders' intervention for the release of 84-year-old Father Stan Swamy, who was arrested on Oct. 8 accused of sedition and having links with a banned Maoist group. He has been in jail since then and been denied bail twice.
Donate to UCA News with a small contribution of your choice
"We want Father Stan Swamy to be released on bail immediately on account of his deteriorating health and his advanced age," Bishop Fernandes said, explaining the content of the memoranda.More than 200 people under the banner of the United Christian Forum also silently demonstrated in Belagavi town before handing over the memoranda to the district official.

"We are peeved and concerned about his health as he himself had written to one of his priest colleagues that he needed help from others for eating, drinking, and carrying out other personal needs," Bishop Fernandes told UCA News on Nov. 18.

The court has not yet responded to Father Swamy's Nov. 6 application to allow him to use a sipper and straw as he could not consume liquids naturally because of Parkinson's disease. The court has posted its next hearing for Nov. 26.

In a letter to one of his Jesuit colleagues, the priest recently said he lives in a cell of about 13 feet x 8 feet, along with two more inmates.

"It has a small bathroom and a toilet with an Indian commode. Fortunately, I am given a western commode chair," the letter said. 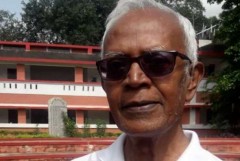 The priest said that people arrested with him, such as Varavara Rao, Vernon Gonsalves and Arun Ferreira, are in another cell.

"During the day, when cells and barracks are opened, we meet with each other. From 5.30pm to 6am and noon to 3pm, I am locked up in my cell with two inmates," Father Swamy wrote.

"Arun assists me to have my breakfast and lunch. Vernon helps me with the bath. My two inmates help out during supper in washing my clothes and giving massage to my knee joints."

His inmates are "from very poor families. Please remember my inmates and my colleagues in your prayers. Despite all odds, humanity is bubbling in Taloja prison" in Maharashtra state, the letter said.

The priest is among 16 social activists and lawyers arrested under the stringent Unlawful Activities Prevention Act by the federal National Investigation Agency (NIA) whose role is to combat terror in the country.

The case linked them to a violent incident in Bhima-Koregaon, a town in Maharashtra, on Jan. 1. 2018, in which one person died and several were injured.

Father Seby Pereira, a Jesuit colleague of Father Swamy, said the elderly priest is already suffering from age-related issues and many other diseases including Parkinson's.

He said that although church officials are convinced that Father Swamy is innocent, they are not asking to free him from a trial.

"We are only seeking bail on health grounds. We know he has not committed any crimes. But we are not asking to drop all charges. Let the probe agency continue its probe. We want him to be released on bail so that we can take care of his health," Father Pereira said.

All the arrested activists have questioned the policies of the pro-Hindu Bharatiya Janata Party (BJP) that rules the federal government and several other states in India.