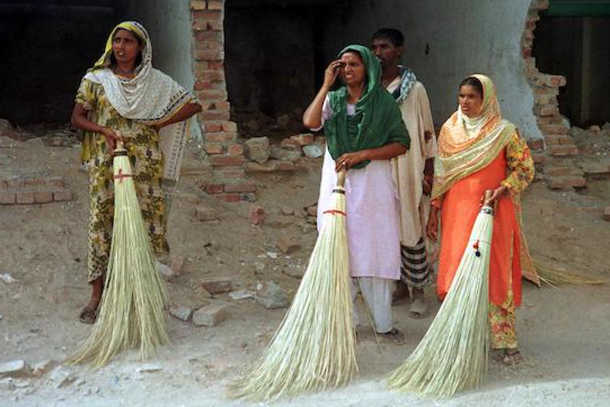 Street sweepers wait for a procession to pass through before resuming cleaning work in the Pakistani city of Multan in this 2017 file photo. Most sanitation workers in Pakistan are Christians. (AFP photo)

A Pakistan army advertisement offering sanitation jobs for Christians has drawn online criticism for being discriminatory towards the minority community.

The advertisement, run by several English and Urdu newspapers on June 23, announces vacancies for the posts of drivers, sepoys, tradesmen and sanitation workers in the army’s Mujhahid Force.

The sanitation jobs have been specified for Christians only, the advertisement reads.

The ad has angered minority rights activists who urged the army to discard its discriminatory policy of recruiting only Christians for sanitation work.

“Honorable @OfficialDGISPR, Pak Christians have a great deal of love and respect for our armed forces. Even though a good number of Christians are working as janitors, tagging them with janitorial work badly reflects on us. We have high expectations from you. kindly intervene!!!” Asiq Aqeel, a minority rights activist, journalist and researcher, wrote on Twitter, tagging army chief spokesman Maj-Gen Asif Ghafoor.

Mary James Gill, a Christian political worker and a member of the opposition PML-N party, said the policy of recruiting only Christians as sweepers tarnishes the image of Pakistan.

“Dear DG ISPR, this is not the 1st time such ads have appeared. As a Pakistani Christian I feel no shame in cleaning my country but this policy muds the image of #Pakistan being discriminatory against a religious minority. Please take notice. Christians are not just sweepers,” she tweeted.

Responding to people justifying the advertisement, Gill questioned why there cannot be quotas for Muslims to be employed as sweepers since Islam says cleanliness is half of faith.

Salman Sufi, a former official of the Punjab government, recalled that his provincial government had struck down this policy of delegating sanitary jobs with Christians only a few years back because it was discriminatory.

“I request you [the army] to please do the same as it doesn’t suit the image of our armed forces. Thank you in advance,” Sufi said.

“Why should Christians in Pakistan be janitors only? Why does a janitor have to be a Christian? How would we react if U.K. or U.S. armed forces advertised janitor jobs only for Muslims? Please end this behaviour with minorities in Pakistan,” she demanded.

“What has religion to do with certain types of work? Really disappointed to see the label of religion for grade 1 works. We must stand up for principles of equality and discrimination-free institutions. Let’s hope #DGISPR #PakArmy takes notice of such labels. Thank you,” Dr. Fatima Skiba Qalandarie wrote on Twitter.

The army has made no comment about the advertisement.

Christians account for around 2.5 percent of Pakistan’s population of 220 million, according to the 2017 national census. The representation of Christians in menial cleaning jobs is extremely high.