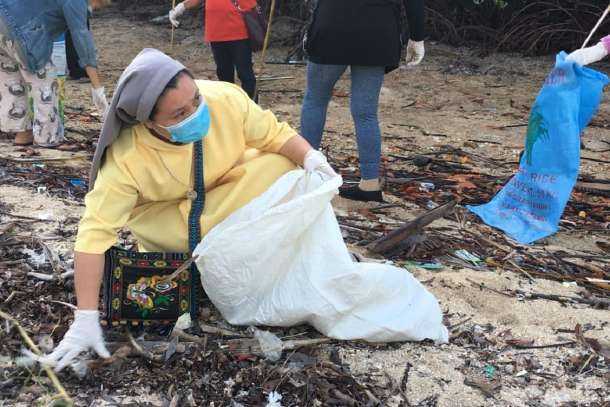 A nun picks up garbage on a Palawan beach during an interfaith clean-up drive to mark the Season of Creation on Sept. 3. (Photo supplied)

Catholics and Muslims came together on Sept. 3 to mark this year’s Season of Creation by picking up garbage and plastic along the coast of a local community on the Philippine island of Palawan .

Palawan is known as one of the Philippines’ most popular tourist destinations due to its rich wildlife and sandy beaches.

In 2017, Palawan was named the most beautiful island in the world by renowned international travel magazine Travel+Leisure, which cited its rich flora and fauna. The island is also famous for its underground river and diving sites.

The clean-up drive was in response to the newly launched Season of Creation, an ecumenical effort to respond to Pope Francis’ call to save the earth from environmental degradation.

“This interfaith project is our little way to respond to Pope Francis’ call to care for the earth, our common home,” Palawan Bishop Socrates Mesiona said in a statement.

“Common home means all peoples, regardless of religion or religious affiliation, the earth is the home of all mankind. So, all of us must take care of the earth.”

Bishop Mesonia also said the project was intended to send a message to all Filipinos, Catholic and non-Catholic, to denounce the “throwaway culture” of today’s society.

“Allah created humans to be guardians of his creation.  Nature does not belong to us. It is just entrusted to us by Allah for safe-keeping,” he said.

“The world is green and beautiful, and Allah has appointed you [Muslims] his guardian over it. This is according to the teachings of the prophet Muhammad.”

Hadji also thanked the apostolic vicariate for the opportunity for Muslims and Christians to work together for the environment.