Christian and Muslim activists in Pakistan have joined forces in accusing lawmakers of blasphemy for throwing copies of budget documents inscribed with the name of Prophet Muhammad.

Chaos ensued in the National Assembly on June 15 when the leader of the opposition started his speech on the recently presented budget.

Punches were thrown, budget documents lobbed from the treasury benches to the opposition and vice versa, and abuse exchanged on the floor of the assembly. Several politicians were injured.

Tariq Asad, an Islamabad-based lawyer, filed a blasphemy complaint the next day at a police station against the opposition and treasury members.

“The first page of the budget book is inscribed with Durood Shareef [a salutation for Prophet Muhammad] and Bismillah [in the name of God]. It ends with the name of Prophet Muhammad. The criminals of the National Assembly have intentionally desecrated the holy statements by throwing this book. It has hurt the religious sentiments of millions of Muslims in Pakistan,” Asad said.

Many members of minority communities in Pakistan have been charged under Section 295-B of the blasphemy law, which stipulates that defiling a copy of the Quran is punishable by life imprisonment.

In April, two Christian nurses were detained by police after being accused of tearing a sticker inscribed with Durood Shareef from the cupboard of a hospital in Faisalabad, Punjab province

Christian netizens have shared images of the budget documents.

“Throwing budget books at each other which start with the name of Almighty Allah isn't blasphemy but if Christians unknowingly and in ignorance throw newspaper pages bearing the name of Allah, it is blasphemy," stated a post on Christians in Pakistan, a Facebook group. 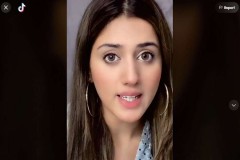 “If a Christian nurse of Faisalabad is accused of blasphemy for tearing a poster, then all in the National Assembly should be accused under [Section] 295 for trampling copies inscribed with Quranic verses,” it stated.