Appointment hailed as a reconciliation effort toward country's ethnic minorities 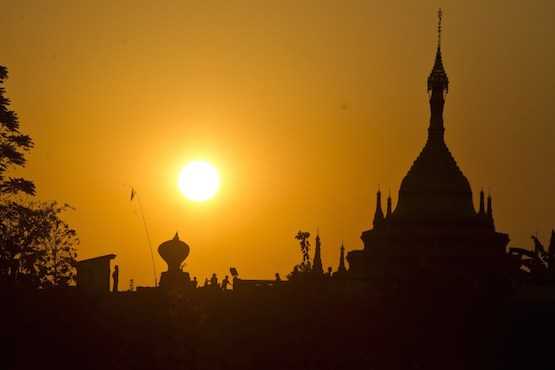 A view of the sunset in Naypyidaw, Myanmar's capital. Aung San Suu Kyi's National League for Democracy party appointed an ethnic Christian lawmaker to serve as speaker of the country's upper house. (Photo by AFP)

An ethnic Karen Christian lawmaker from Aung San Suu Kyi's National League for Democracy party has been selected to serve as speaker for Myanmar's House of Nationalities.

Mahn Win Khaing Than is among at least 40 Christian lawmakers in the new parliament, where hundreds took their seats in the upper house on Feb. 3. The league controls 135 of the upper house's 224 seats, while the military maintains 56 unelected seats.

"We must work to make laws that are needed and abolish laws that are necessary for getting peace, rule of law and national reconciliation," Mahn Win Khaing Than told lawmakers, according to local media reports.

Mahn Win Khaing Than, a Baptist politician, is the grandson of Mahn Ba Khine who was assassinated along with Myanmar's independence hero Gen. Aung San by a rival faction group in 1947.

The 63-year-old worked as a lawyer before winning an upper house seat for the Karen State constituency in the Nov. 8 elections. He is a former secretary of the Karen Literature and Culture Association and joined the Union Karen League in 1990, which contested elections in 1990.

The appointment is being hailed for advancing the cause of reconciliation and peace with Myanmar's more than 100 ethnic groups, many of whom have long-simmering conflicts with the government since the country achieved independence in 1948.

"I am very proud of him and I see that choosing an ethnic minority as speaker advances the national reconciliation effort by Suu Kyi," Mahn Johnny, told ucanews.com on Feb. 2.

Saw Shwe Lin, general secretary of Myanmar Council of Churches, hailed the appointment as a recognition of the rights of all ethnic and religious minorities.

He is a leading member of hard-line Buddhist party — the Arakan National Party — in Rakhine state, where anti-Muslim violence in 2012 and 2013 left at least 200 people dead and more than 140,000, mostly Rohingya Muslims, confined to refugee camps.

Aye Thar Aung worked with Suu Kyi in 1990, when he was a member of the Committee Representing the People's Parliament, which she headed.