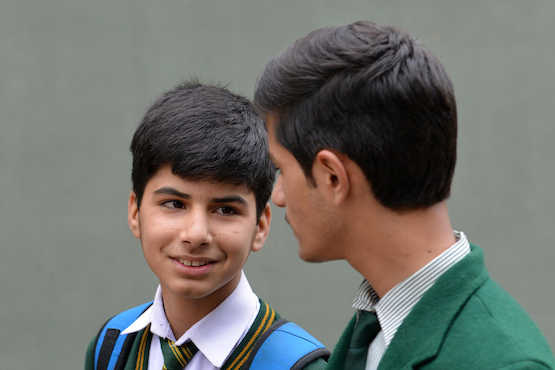 Two Pakistani schoolboys chat in this December 2015 file photo. Sheron Masih, a Christian student at a school in Burewala, in Punjab province, was killed by classmates on Aug. 30 for allegedly drinking from a cup used by Muslims. (Photo by A Majeed /AFP)

Classmates beat a Christian student in Pakistan to death three days after starting his new school because he drank water from a cup meant for Muslim students, his family says.

Sheron Masih was a Grade 9 student at a government-run school in Burewala, in Punjab province.

He was killed because he was a Christian, the student’s father, Elyab Masih, told ucanews.com by phone.

"On his first day at his school, a teacher called my son a chuhra and kicked him out of the class for not wearing school uniform," he said. "My son was so terrified, he skipped school the next day."

Chuhra is a derogatory term aimed at Christian sanitary workers.

"I bought him a new uniform after which he agreed to return to school. Later in the day I was told that my son was dead after being assaulted by his classmates," he said.

"We are in shock and don’t understand why this happened. Some say that he was attacked for drinking water in a cup meant for Muslim students only."

The killing took place on Aug. 30.

A local police spokesman, Muhammad Sadiq, said a suspect has been arrested and that an "investigation is under way to determine the motive."

The student’s mother, Riaz Bibi, said she warned her son not to mix with Muslim students at school.

"He was targeted because of his faith," the Christians in Pakistan online news site, quoted her as saying.