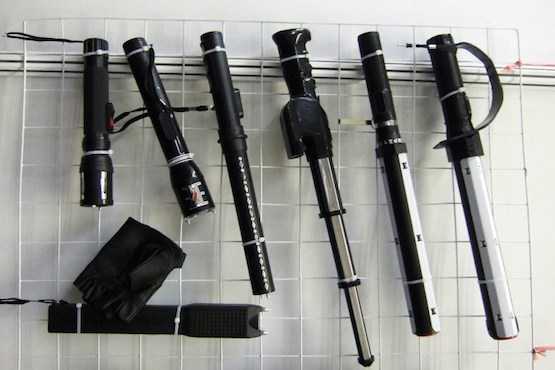 Some of the electric shock stun batons made by Jiangsu Anhua Police Equipment, a manufacturer of police and military equipment in China. Two imprisoned Chinese Christian human rights lawyers have been subjected to electric shocks and other forms of torture, says a rights group. (Photo by Robin Ballantyne/AFP)

Two Chinese Christian human rights lawyers have become the latest victims of Beijing's campaign against those it considers a threat to the state.

Li Heping's and Wang Quanzhang had been subjected to electric shocks and other forms of torture, according to a report by Christian human rights group China Aid, citing comments made by Li's wife, Wang Qiaoling.

The two lawyers had been charged with "subverting state power," the China Christian Daily website reported.

In an apparent indication of the gravity of the torture, Li's wife told China Aid that her husband fainted several times during one electric shock session.

Li and Wang were first to be taken into police custody in 2015 as part of a nationwide round-up of human rights lawyers in China who are considered a threat by the government.

However, Li reportedly "vanished" while in police custody that year. He apparently reappeared after a few months and was formally arrested on Jan. 20, 2016. Currently, he is locked up at the Tianjin Municipal Detention Center No.1.

Aside from Christian lawyers, human rights activists, pastors and churchgoers have also suffered in light of the government's campaign.

In January, Pastor Yang Hua, also known as Li Guozhi, was sentenced to two and a half years in prison for "divulging state secrets." He too had reportedly been tortured.

"This is nothing but purely barbaric religious persecution," said Bob Fu, president and founder of China Aid.