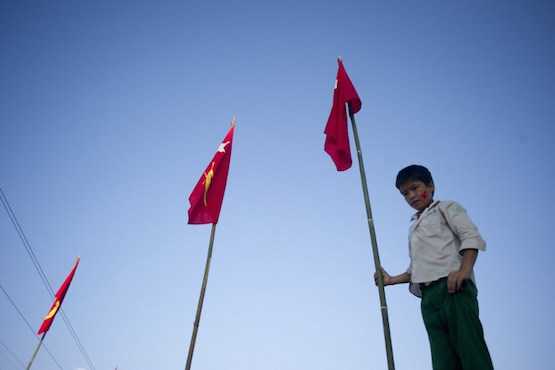 A boy stands next to National League for Democracy party flags after attending a rally where Aung San Suu Kyi gave a pre-election speech on Oct. 2 near Myitkyina, the capital of Kachin state. After decades of internal conflict, many people in ethnic regions hope that Aung San Suu Kyi's party will be able to bring peace to the country. (Photo by AFP)

Christian politicians in Myanmar's ethnic minority regions say they have high hopes in an upcoming peace conference but remain wary about the military's attitude towards the process needed to end decades of civil war.

As part of the civilian government's pledge to bring peace to the country, the "21st Century Panglong Conference" is scheduled to be held in the capital Naypyidaw in August. All of the country's armed ethnic groups will be invited to take part in the conference.

State Counselor Aung San Suu Kyi's father, General Aung San, organized the first Panglong conference in 1947, which had the aim of granting self-autonomy to the Kachin, Chin and Shan ethnic minorities before the country gained independence in 1948.

The general's assassination following that conference impeded agreements made, resulting in many ethnic groups taking up arms against the central government. Some of those conflicts have  continued on and off for more than six decades.

"Our people have high hopes in Aung San Suu Kyi and believe that she is trying hard to pursue peace," Shu Maung told ucanews.com. "But we are also concerned about the attitude of the military which is still powerful in the country," he said.

Shu Maung said that the upcoming peace conference would be a step forward in building trust and starting the process required for building peace and a functioning democratic federal union.

"The voices of ethnic people have been ignored for decades and their regions are underdeveloped so equality must be implemented under the NLD-led government," he said.

Myanmar transitioned into a hybrid military-civilian government in 2011, ending more than 50 years of military rule. Since 2012, the government began to initiate a peace process with some of the armed ethnic groups. Last October a national ceasefire pact came into effect with eight out of 20 armed ethnic groups.

Fighting continues in certain ethnic areas especially in the north and east of the country where the military is on the offensive against non-signatory groups such as the Palaung rebels and the Kachin Independence Army.

Lama Naw Aung, a Catholic and Lower House lawmaker from the Kachin State Democracy Party, said he expects all stakeholders — the military, ethnic armed groups, the government and political parties — to try hard to deliver peace for the country.

"We are concerned though that being the military is still waging war in some ethnic areas. This is not a good sign, we must end any fighting before the peace conference begins," Naw Aung told ucanews.com.

Over 100,000 Kachins have been displaced since June 2011. They currently reside at temporary camps in Kachin and Shan states.

Earlier, Cardinal Charles Maung Bo of Yangon  also called on people in Myanmar to make the most of the upcoming conference so as to deliver peace and justice to the country.

"The Panglong conference is an opportunity not to be missed by any party," Cardinal Bo said in a June 16 statement.

Myanmar's ethnic minority groups make up a third of the country's 51.4 million people.

Many Christians live in the country's ethnic-based states of Chin, Kachin, Karen and Kayah in what is otherwise a predominately Buddhist country.