A prominent Christian politician accused of blasphemy says she is being targeted by conservative elements in Indonesian society for speaking out against Shariah and Gospel-based bylaws.

Grace Natalie, 36, a Protestant and founder of the Indonesian Solidarity Party (PSI), was reported to police on Nov.16 by a conservative Muslim organization.

She was accused of blasphemy for criticizing laws prohibiting so-called "immoral acts" such as gambling, drinking and socializing with members of the opposite sex in a speech at a party gathering in Tangerang, near Jakarta last week.

"The PSI will prevent injustice, discrimination, and all intolerant actions in this country. The PSI doesn't support Gospel and Sharia bylaws," she was quoted as telling the gathering.

Speaking to reporters on Nov. 19 in response to the allegation, the former TV journalist said, "The implementation of religion-based bylaws victimize women and I have become a victim as well for criticizing such regulations."

The National Commission on Violence Against Women says there are 421 discriminative regulations being implemented in 13 provinces, including in Manokwari district in Papua, which has a "Bible-based bylaw" banning alcohol and gambling.

Aceh province in Sumatra has implemented Shariah bylaws and many people, particularly women who breached the rules, have been caned in public.

According to conservative group the Indonesian Muslim Workers' Brotherhood, which lodged the blasphemy complaint, Natalie's speech was against the Quran

"Her comments appeared hostile [to Islam] and was considered hate speech against religion," the group's lawyer Eggy Sudjana said.

Plenty of other organizations dismissed the brotherhood's claim. 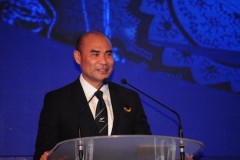 Rights group, the Setara Institute for Peace and Democracy said Natalie's speech was not blasphemy and police should not waste their time on what looks like a politically motivated complaint.

"Political interest is probably behind the majority of blasphemy accusations and the judicial process is influenced by political pressure through mass mobilization," said Hendardi who like many Indonesians only uses one name.

Petrus Selestinus, a Catholic lawyer, said the brotherhood quite clearly misunderstood the substance of Natalie's speech.