In many countries, Christians are denied food and pandemic-related health care assistance and support systems 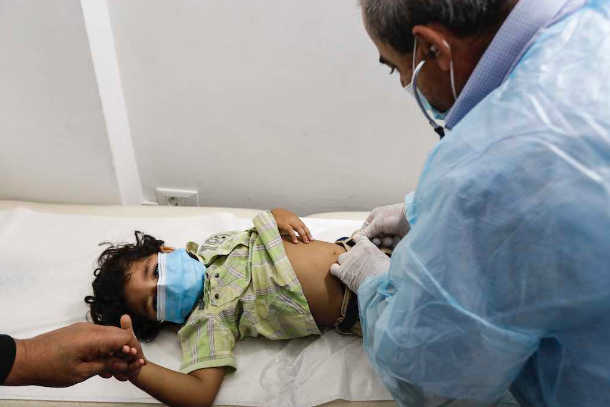 A physician examines a child, wearing a mask due to the coronavirus pandemic, at a clinic of the Amel NGO in Lebanon's southern coastal city of Tyre on July 22. (Photo: Joseph Eid / AFP)

An international Christian charity has claimed that discrimination against Christians increased around the world after the coronavirus pandemic.

For authoritarian governments, which already limit religious freedom, the pandemic has become a pretext to step up persecution against the Christians, Release International said.

In China, churches are demolished, and Christians are arrested for holding online prayers, Release International said.

“Cries for help are being ignored by local charities,” who are discriminating against Christians, Robinson was quoted as saying by the UK-based The Tablet.

He cited the plight of Christians in Eritrea, where the Christians, who are fleeing persecution, are barred from accessing shelter camps and other UN support systems.

Families disown many people after they convert to Christianity. Such people are also denied access to the support system as they refuse to participate in criminal activities.

In Muslim-majority Pakistan and Egypt, life has become increasingly difficult for new converts after the Covid-19. Most of the Christians in these countries live in poverty.

After the Covid-19 lockdown, Christians face a hard life in these countries as they do not have work. Some of them even lacked the money to buy face masks and hand sanitizers.

Release International said that its partners have reported that China has increased its crackdown on Christians after the pandemic hit the communist country.

In China, online Church services are “totally prohibited, and the participants and their leaders are “rounded up” for preaching and distributing face masks at public places.

A Christian in the coastal province of Shandon in China who urged Christians to pray and fast for nine days for the victims of Covid-19 was picked up for organizing an illegal religious service, the Catholic weekly said, quoting Release International.

Open Doors, a charity helping the persecuted Christians in the world, said that the pandemic had created more opportunities for persecutors to attack believers.

“Though many factors determine the vulnerability of populations to Christian persecution and to Covid-19, a common thread between the two vulnerabilities has surfaced in Niger,” said Open Doors' Paige Collins in a media interview this month.

While the ordeal of Christians in Africa, including Nigeria and Ethiopia, has increased significantly due to the coronavirus, “making a bad situation worse for Christians and other religious minorities,” Collins added.