Members of parliament leave after attending a meeting at Myanmar's Lower house in the capital city of Naypyidaw on March 10. Aung San Suu Kyi's party on nominated her close aide, Htin Kyaw, to be Myanmar's next president. (Photo by AFP)

An ethnic Christian lawmaker has been nominated as a vice presidential candidate as Myanmar's national parliament began its presidential selection on March 10.

Henry Van Thio, a 57-year-old ethnic Chin minority from the Pentecostal Church, has been nominated during the upper house's parliamentary session.Henry Van Thio,  is expected to be one of two vice presidents in Myanmar.

The choice of having a minority ethnic as a vice president is a symbolic gesture by Aung San Suu Kyi's National League for Democracy party to assist national reconciliation efforts, say observers.

Combined, Myanmar's minority ethnic groups make up a third of the country's 53 million people. As part of that, Christians heavily populate Myanmar's ethnic-based states of Chin, Kachin, Karen and Kayah in an otherwise predominately Buddhist country.

Shay Ray Shu Maung, a Catholic and upper house Member of Parliament from the National League for Democracy in Kayah state, said it was unexpected and surprising that an ethnic Chin lawmaker was nominated as a vice presidential candidate.

"We are very glad that a minority ethnic is nominated as a vice presidential candidate and it is part of the party's national reconciliation efforts with ethnics," Shay Ray Shu Maung told ucanews.com on March 10.

The National League for Democracy has also nominated U Htin Kyaw, a 70-year-old Oxford graduate and a close  aide to be the country's president.

Htin Kyaw, is a senior member of Suu Kyi's mother's charitable foundation the son of prominent writer, Min Thu Won who contested the 1990 election. He is also a son-in-law of the National League for Democracy's co-founder, U Lwin. He is expected to be a proxy president for Suu Kyi.

Lama Naw Aung, a Catholic and lower house parliament member from the Kachin State Democracy Party, said that he will support the National League for Democracy-nominated candidate in the presidential voting. 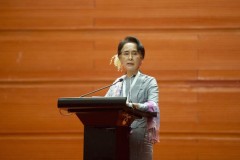 "Suu Kyi can't become the president at present but she can give instructions to the president and she can still play a great role in the country as a leader," Lama Naw Aung told ucanews.com on March 10. "I think the issue of amending the constitution will proceed on," he added.

The 2008 military-written constitution bans Suu Kyi from becoming president because she married a foreigner and their children are not Myanmar citizens.

Je Yaw Wu, a Catholic and upper house lawmaker from National Unity Party in Kachin state, said while people may hope that Suu Kyi will one day become president, the military will still block it.

"The military is the key player and they need to collaborate with Suu Kyi," Je Yaw Wu told ucanews.com on March 9. "They should amend a clause for her presidency for the sake of national reconciliation," Je Yaw Wu said.

Talks between Suu Kyi and the still powerful military chief Min Aung Hlaing appear to have broken down over a suspension of the clause of the constitution following the Nov. 8 general elections.

The military have a quarter of seats in the national parliament and retain the right to nominate one candidate, which it has yet to do.

The presidential vote is expected within a few days.