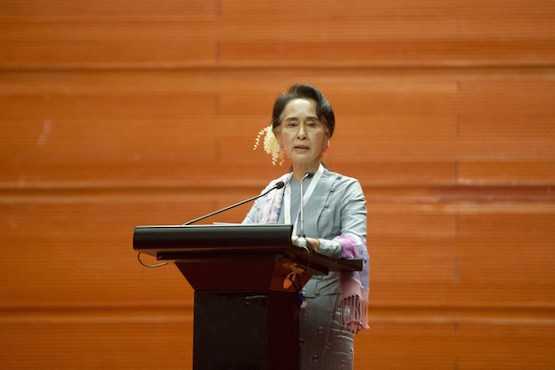 Christian MPs in Myanmar are backing a possible bid by National League for Democracy leader Aung San Suu Kyi to become president by negotiating with the military to have a key clause in the constitution overturned.

Nobel laureate Suu Kyi's National League for Democracy (NLD) won a combined 390 of the 664 seats in the upper and lower houses of Myanmar's national parliament during the Nov. 8 elections. This is sufficient for the NLD-dominated parliament to choose two out of the three presidential candidates. The military retains the right to nominate one candidate.

However, Suu Kyi has said during the election campaign that no matter what, she would be  "above the president." But speculation has emerged that Suu Kyi could become the president of Myanmar.

Shay Ray Shu Maung, a Catholic and upper house MP for the NLD party in Kayah State, said that he expects Suu Kyi will become the president.

"It seems that there are positive negotiations between the military and NLD leaders and there is a dawn of hope among the parliamentarians. So I hope that the desire of the people will be fulfilled before March 17," Shu Maung told ucanews.com on Feb. 8.

Je Yaw Wu, a Catholic upper house MP representing the National Unity Party in Kachin State, said that all people, including MPs, have observed that there is still an opening for negotiations with the military on Suu Kyi's presidency.

"The constitutional clause 59f should be amended not only for Suu Kyi but for future generations. But the danger is if the military takes a tough stance on it," Je Yaw Wu told ucanews.com.

Still, the military-run Myawaddy newspaper last week said that the armed forces, who have run the country since 1960 and are preparing to hand over power by March 31, will not accept to amend that clause. Military sources have also told media outlets that they will not accept a suspension of the clause.

Outgoing president Thein Sein has appeared not to back Suu Kyi's bid in a Feb. 8 letter to parliament saying that the new parliament needs to enact, revise or amend laws in accordance with stability, rule of law and interest of people, by safeguarding the constitution.

Pe Than, a lower house MP from the Arakan National Party, a hard-line Buddhist, said that the NLD should not rush to make the amendment as it might cause a confrontation with the military and bring unnecessary side effects for the country.

"Even though Suu Kyi can't become the president, she can carry out many things for the country as leader of the NLD and she can also advise the president," he added.