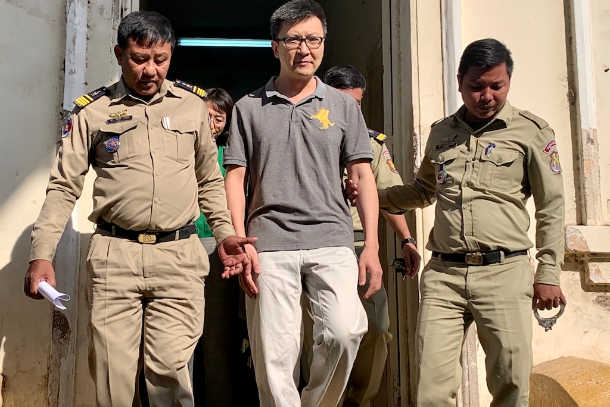 Christian missionary Martin Chan is released on bail by a Cambodian court on Feb. 7. He is facing allegations of criminal fraud after plans to build a school were abandoned amid a dispute with a construction company. (Photo: Luke Hunt/UCA News)

A Christian missionary who worked as a volunteer in Cambodia has been released on bail by a Phnom Penh court amid bitter wrangling over plans to build a multi-million-dollar school for 1,000 bilingual students.

Martin Chan, 49, was greeted with hugs from family, friends and supporters who packed the court as a bench of three judges announced their decision on Feb. 7.

“Now I just want to go home with my wife,” he said after spending three months in Kandal Provincial Prison sharing a cramped cell with 90 inmates.

Chan’s case has been closely followed in Cambodia, where the Australian has earned widespread praise for his charity work, and abroad, where more than 13,500 people have signed a petition demanding his release amid claims the court was being used for a cash grab.

Chan arrived in Cambodia from Australia seven years ago with his wife Deborah Kim to work with Christian charity His International Services. He was an unpaid volunteer but signed off with director Jung Young-Kim on plans to build a school in Kandal, south of Phnom Penh.

Local firm PHV Construction was contracted but the project ran into difficulties and was scrapped in 2016 and a legal tussle ensued.

The case went before the National Commercial Arbitration Centre, where Chan and his charity were cleared of any wrongdoing. Young-Kim then left Cambodia for South Korea.

However, PHV claimed criminal fraud and alleged that fraudulent actions by Chan and Young-Kim had heavily damaged the company. Chan was arrested in November while boarding a flight to Hong Kong.

PHV is understood to be demanding more than US$1 million in compensation.

Chan said prison was difficult and that he feared being held behind bars indefinitely after two previous bail applications were rejected. But he added he was treated well by sympathetic guards who understood his plight.

“I’m feeling very good,” he added before being returned to Kandal prison where paperwork had to be cleared to enable his release. “I just want to spend more time with my wife.”

The court has yet to set a date for his criminal fraud charges.