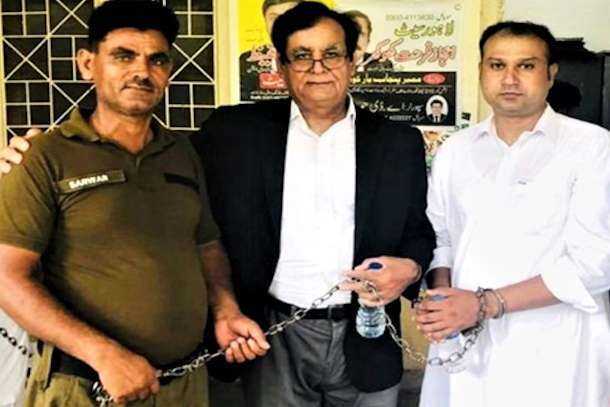 Asif Pervaiz (right) was accused by his Muslim supervisor of sending defamatory comments about Prophet Muhammad in 2013. (Photo: YouTube)

A Christian man who was sentenced to die under Pakistan’s controversial blasphemy laws has filed an appeal in an attempt to have his conviction overturned.

Asif Pervaiz was handed the death sentence by a trial court in the eastern Pakistani city of Lahore on Sept. 8.

The 37-year-old garment factory worker had been accused by his Muslim supervisor of sending defamatory comments about Prophet Muhammad in 2013, an offense that carries a mandatory death penalty. He has been in jail for seven years.

According to the verdict, Pervaiz will have to serve three years in prison for misusing his phone before being hanged by his neck until death.

The lawyer told UCA News that it may take a few years before his appeal is taken up for hearing by the court.

On Aug. 30, David Masih, a Christian from Khyber Pakhtunkhwa province, was charged with blasphemy on accusations of throwing pages of the Quran in a drain for witchcraft. If found guilty, Masih could face life in prison.

In July, a US citizen was gunned down inside a courtroom in Peshawar during a hearing of his blasphemy case.

In recent weeks, the UN human rights office and Amnesty International have raised alarm over an increase in blasphemy accusations targeting minorities.

Amnesty International has called for a repeal of the blasphemy laws, saying they enable abuse and risk lives.

“The broad, vague and coercive nature of the blasphemy laws violate the rights to freedom of religion and belief and of opinion and expression. They have been used to target some of the most marginalized people in society, including children, individuals with mental disabilities, members of religious minorities and poorer people,” it said.