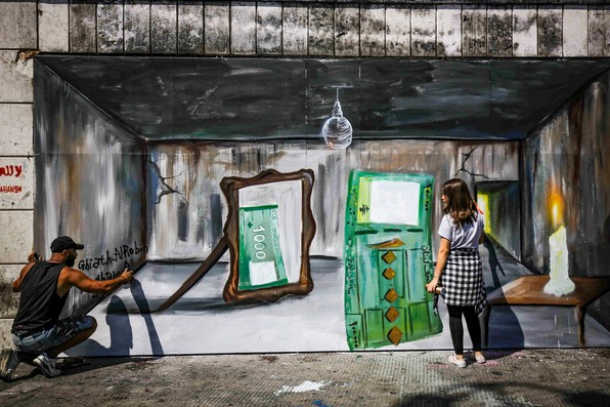 (L to R) Palestinian-Syrian artist Ghayath al-Roubeh and Lebanese artist Nagham Abboud paint together a graffiti mural depicting a 100,000 Lebanese pound banknote being reflected in a mirror as a 1000 Lebanese pound note, symbolising the level of inflation caused by the shrinking Lebanese economy, at al-Nour Square in Lebanon's northern port city of Tripoli on July 8, 2020. (Photo: Ibrahim CHALHOUB / AFP)

Lebanon's Christian authorities have accused political leaders of plunging the nation into economic ruin and potential famine as the tiny Mediterranean country faces it worst crisis since the 1975-1990 civil war.

Lebanese have seen their national currency lose 80% of its value against the U.S. dollar, a majority currency also used in the country, since nationwide protests erupted in October.

Demonstrators have railed against decades of corruption and mismanagement by the political elite. Now, they condemn the dire living conditions and incessant power cuts engulfing Lebanon, once known as the "Switzerland of the Middle East." They demand long-term political reform.

"It appears politicians want to hide their responsibility in emptying the treasury and not enact any reforms," he said.

Government talks with the International Monetary Fund were put on hold July 3 after a dispute between fractious politicians and the central bank over the scale of losses in the financial system and the start of reforms to address the root causes of Lebanon's economic crisis. The IMF has required reforms in the system for an initial $10 billion bailout loan which would keep the badly failing economy afloat. In March, Lebanon for the first time defaulted on its foreign debt.

"Political officials ... do not have the courage nor the freedom to meet and find ways out of the suffering," Cardinal Rai said. He warned this was depriving the country of help it needs from potential foreign donors, including France and the United States, which say Lebanon must fix state waste and corruption before aid is released.

The government of Prime Minister Hassan Diab, backed by Aoun and the Iranian-back Shiite Hezbollah militia, has avoided embarking on serious reforms likely because it would undermine their support base. Hezbollah has seen its influence grow in Lebanon's political arena since winning a parliamentary majority in 2018. Washington classifies it as a terrorist group. Critics charge Lebanon's political patronage system running along sectarian lines has reinforced widespread corruption.

Joseph Bahout, a Lebanese academic fellow in the Middle East program at the Carnegie Endowment for International Peace, told Catholic News Service that Lebanon is in a "very dangerous situation" as IMF talks stall.

"The classical political class, opposition included such as (former Prime Minister Saad) Hariri, aren't very much happy with the entire process because they know that this kind of reform, the way it is perceived and operated by the IMF, will hit also their own interests in the country," he said. "There is a kind of hypocrisy…no one wants to go to the IMF except maybe certain technocrats."

Numbers of Lebanese now have been reduced to begging in the streets, scavenging garbage for something to eat or bartering clothing, furniture and other objects for food as prices soar, businesses close, unemployment surges at 30 percent, and salaries and savings vanish.

A video circulating on social media in Lebanon showed someone lying on a sidewalk in eastern town of Baalbek holding a sign: "I am an educator, I am educated, I am begging to live."

While in the capital, Beirut, unemployment has forced numbers onto charity and food banks. Still, others more desperate have committed suicide. One man shot himself on a busy Beirut street, leaving a note referencing a famous song about poverty written during the 1975-1990 civil war.

"Oh respected leaders, I address whatever conscience remains in you," he said in a weekend sermon. "Do you sleep comfortably at night while those under your care starve, and die of thirst and by suicide?"

Analysts warn that if the government runs out of dollars it has been spending to subsidize bread, medicine and fuel -- and without foreign aid to help -- Lebanon could face mass hunger.

Raoul Nehme, Lebanon's minister of economy and trade, said July 8 that, in a bid to ease prices, plans are afoot for the government to fully subsidize "300 basic commodities, including meat and derivatives, oil products, vegetables, seeds, nuts, milk, tea, coffee, poultry, etc." with a Lebanese pound exchange rate of 3,900, rather than the current 9,000 to the dollar on the black market.

The minimum wage is 675,000 Lebanese pounds per month -- worth $450 at the official rate -- but about $70 on the black market that's increasingly used to price consumer goods including clothes, cleaning products and toiletries.

Meanwhile, the government has now appointed a new board of directors to control the state-owned electricity authority, Electricite du Liban, that has been long mired in allegations of corruption and fraud. Regulating the electricity sector has been a key IMF demand of the company, which has seen losses of up to $2 billion a year, considered the biggest single drain on state finances. Lebanon grapples with power cuts of over 16 hours a day.

But most economists warn that the dollar rates will continue to surge haphazardly, if the confidence in Lebanon's economy and the national currency are not restored.