A man in a fishing boat travels along the Mekong River in Nong Khai province in northeastern Thailand. Concern is mounting over plans by Laos to build a new dam on the river. (Photo: AFP)

The Mekong, one of the world’s mightiest rivers, is disappearing before our very eyes, but its impending demise is hardly an act of God, as the saying goes. Rather, all too human greed and unconcern are to blame.

Hardly a week goes by without yet more bad news about the parlous state of the river that passes through six countries between China and Vietnam, with tens of millions of people depending on its life-giving waters for their sustenance and livelihoods.

Each year there is less and less river water to go around, especially downstream in countries such as Thailand, Cambodia and Vietnam. Right now, the water level of the Mighty Mekong has reached critical lows in parts of Thailand. The river now stands at a mere meter deep for long stretches.

The current state of the Mekong appears like an apocalyptic scenario straight out of The Book of Revelation. 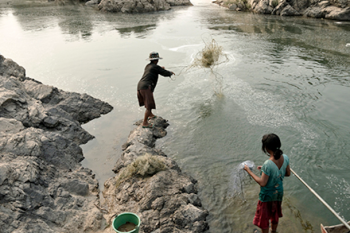