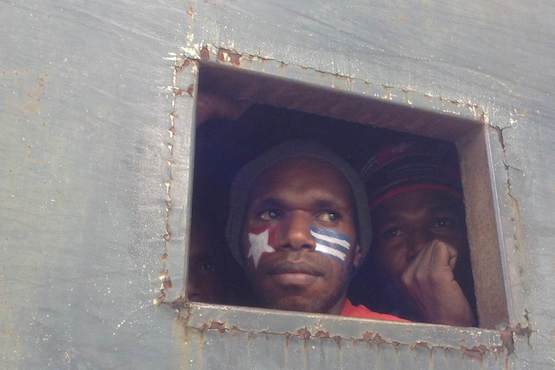 Papuans peer out of a police van after being arrested during a May 1 protest in Jayapura, Indonesia. (Photo by Benny Mawel)

Christian leaders in Papua said the arrest of thousands of protesters on May 2 will not solve the restive region's problems.

Despite most of the people being released the same evening, Christian leaders said repression of the Papuan people will fuel a larger movement.

The National Committee for West Papua reported that more than 1,700 people were arrested May 2 at protests scattered across the province and in cities outside Papua to mark the annexation of Papua by Indonesia on May 1, 1963.

"The government should use this kind of opportunity to dialog with people, not arrest them," the priest told ucanews.com.

The Rev. Benny Giay of the Kemah Injili Church, who attended the protest in Jayapura where scores were arrested, said the detentions were a mistake.

He said people were protesting because they want the government to fix something that has gone wrong.

"People were seeking a solution to their problem, and the Indonesian government must sit together with the people of Papua, develop a dialog to end the conflict," the Rev. Giay said.

Gustav Kawer, a human rights lawyer, said police in Papua should change their approach to protesters.

"They must give space for Papuans to exercise democracy," he said.

According to data gathered by the Jakarta Legal Institute, protesters arrested on May 2 reached 1,724 people, of which 1,449 people were from Jayapura, 118 in Merauke, 45 in Semarang, Central Java, 42 in Makassar, South Sulawesi, 29 in Fakfak, 27 in Sorong, and 14 in Wamena.

"Most of these people have been released, but some were still in police custody in Merauke, Fakfak and Wamena," said Veronica Koman, a lawyer at the agency said in a statement.

Koman added that the number of people arrested in Papua since early April to May 2 has reached 1,839 people.

The agency then called on President Joko Widodo to summon the police chief and his subordinates in Papua and order them to release those still in police custody.

Jayapura police spokesman Jeremias Rontini told ucanews.com on May 2 that the protesters were detained because they did not have a permit to demonstrate.

"Believe me, they are alright. We will let them go this afternoon," he said.