They say evidence suggests a violent blow killed a Protestant minister, not a road accident 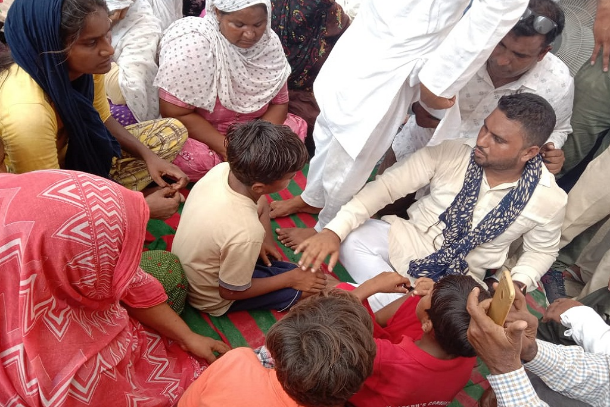 Christian leaders (right) console the widow and children of the pastor they say was murdered in the northern Indian state of Punjab on July 27. (Photo supplied)

Christian leaders are calling for a murder investigation following the death of a Protestant minister who was found badly injured along a road in northern India.

They believe Balwinder Bagicha Bhatti, who was found lying mortally wounded in a pool of blood in Ferozepur district in Punjab state on July 27, died as a result of foul play.

“It was not accidental, it is a clear case of premeditated murder,” Hanook Bhatti, a Punjab-based Christian leader, told UCA News on July 30.

It was not clear whether the pastor and the Christian leader were related.

“I personally visited the spot where the pastor was found along with police and found evidence suggesting murder,” Bhatti said.

“We found an aadhar [Indian ID] card there and the footprints of more than one person, indicating that the pastor was in a fight. A proper probe could shed light on these clues, but they are not doing anything.”

The pastor was an active minister who preached the word of God and this must have led to his murder, he added.

“I saw his body. There was only one catastrophic wound to the back of the head. It looked like a powerful blow from a sharp-edged weapon that led to his death,” he said. 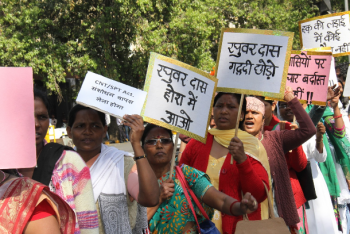 “The pastor was on his way home from a nearby village on his motorcycle. It is a quiet and straight road, so an accident is most unlikely.”

He also said the pastor's motorbike was undamaged. However, “his clothes were torn and leather shoes damaged, indicating a fight,” he added. “The injury to his head indicates somebody had hit him from behind.”

The pastor’s immediate family could not be reached for comment.

“They are frightened and don’t want to put themselves at risk by seeking a probe when they have no means to pursue a case,” said Bhatti, who claimed he had spoken to them. “Privately, they suspect murder but feel powerless to pursue it.”

The Christian leaders said they were trying to gather support for a murder probe to be opened.

According to Persecution Relief, an ecumenical forum, the pastor’s death was the eighth murder of a Christian in India this year for either being a Christian or propagating the faith.

In a half-yearly report released on July 28, it said there were 293 incidents of persecution against Christians across the country in the first half of the year, a more than 40 percent rise on the previous year.

It said the figures painted a grim picture of growing intolerance against Christians, who make up 2.3 per cent of the 1.3 billion population in India.