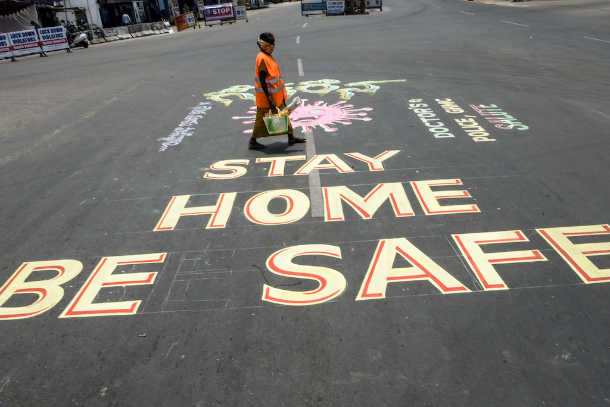 A municipal worker walks past signs at a traffic junction urging people to stay home in Secunderabad on April 16 during a government-imposed nationwide lockdown as a preventive measure against the coronavirus. (Photo: Noah Seelam/AFP)

The death of a doctor from Covid-19 and several positive cases among staff in a private Christian hospital have sparked a health scare in India's Christian-dominated Meghalaya state.

The government in the northeastern state on April 15 confirmed that Dr. John Sailo Ryntathiang of Bethany Hospital in capital Shillong died of Covid-19. Some members of his family and staff have also tested positive.

"I am deeply saddened to inform you that the first #COVID19 positive patient in Meghalaya passed away this morning," Chief Minister Conrad Sangma tweeted on April 15.

Until April 12, Meghalaya was the only Indian state that had no positive cases of Covid-19, and the state was considering reopening offices and business.

Sailo, a 69-year-old Presbyterian doctor and the founder of the popular hospital, was active until April 12 when he began to develop symptoms of the epidemic.

The 175-bed hospital, which opened three decades ago, treats hundreds of people daily in the entire region through its outpatient departments and outreach programs. Health experts now suspect the medical facility to be a coronavirus hotspot.

The state government has sealed the hospital and imposed a curfew in the state capital and nearby township Nongpoh.

All six positive cases in the state so far are "family members and helpers of the first #Covid19 positive case," Sangma's tweet said.

The deceased doctor had no travel history, said a Meghalaya state official. He told UCA News that the state suspects the medic contracted the virus from his son-in-law, a pilot who traveled from New York to Delhi on March 16.

The pilot, who works for state carrier Air India, was placed under home quarantine on March 24 when he arrived from Delhi to Shillong.

Meghalaya state health department said it was establishing contact with "all primary and secondary contacts" of the dead doctor and hospital to check further spread of the infection.

The seven states in the region together have only 46 cases, with 32 in Assam and seven in Meghalaya.

The Christian-majority states of Nagaland, Mizoram and Arunachal Pradesh each have one case, while Manipur and Tripura each have two cases.

"People from all these states visit Bethany Hospital. The fear is that they could have carried back the virus to their villages and homes. It is a real health scare," a Meghalaya state official said.

The state health department's notice asked all who have visited the hospital since March 24 and their family members to self-quarantine at home.