Relatives of Hossain Ali react to the news of his of murder in Kurigram district on March 22. (Photo by Yousuf Alamgir)

Police are hunting for the killers of a Christian man hacked to death in northwestern Bangladesh on March 22.

The murder was the latest in a series of attacks on religious minorities in the Muslim-majority country.

Three attackers rode up on motorbikes and repeatedly stabbed Hossain Ali, 68, while he was taking a regular morning walk in Kurigram district.

They then fled after detonating two small homemade bombs as local people tried to help the victim, police said.

Once a Muslim, he and his family converted to Christianity, joining the local Presbyterian Church in 1999.

No one has yet claimed responsibility for the killing.

"We have detained three people for questioning. Detectives are working with us to get evidence and clues," Jamir Uddin, the Kurigram police station chief told ucanews.com.

Police said they are still in the dark about the motive, but said the killing was similar to the recent murder of a Shia cleric, a Hindu priest and several atheist bloggers carried out by suspected Islamic militants.

"It is too early to say whether religious extremists or personal enmity were behind the killing," said Tobarok Ullah, the Kurigram district police chief. 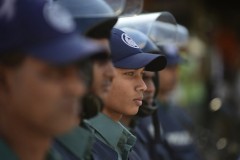 "He was a man of goodness and simplicity. We are still wondering why he should be targeted for such a heinous murder," Forkan Al-Masih, the pastor of the church told ucanews.com.

"We demand a thorough investigation and justice. We also want assurances the local Christian community is protected," Masih said.

A spate of attacks on religious minorities shows a failure by the authorities to protect them, which taints the country’s image as a secular state, a Catholic Church official said March 23.

"We live in a secular state but religious minorities continue to be targeted and the government is failing protect them. It is embarrassing and condemnable," Theophil Nokrek, secretary of the Bangladesh Catholic bishops' Justice and Peace Commission told ucanews.com.

"The government and law enforcers should not take this incident as a sporadic case of violence against minorities, but should take immediate measures to ensure justice and stop the crimes re-occurring," he added.

Muslim-majority Bangladesh has seen upsurge in violence against minorities such as Shia and Ahamadiyya Muslims, Hindus and Christians, including foreigners targeted by alleged Islamic militants.

An Italian missionary Father Piero Parolari escaped death after being shot in Dinajpur, in northern Bangladesh on Nov. 18, while a Protestant minister Luke Sarkar also survived a murder attempt in Pabna district on Oct. 5.