Catholic, Protestant leaders call on all Christians to vote in run-off poll A woman takes a selfie as Jakarta's Christian governor Basuki Tjahaja Purnama, better known as "Ahok," arrives to cast his vote in Jakarta on Feb. 15 in the first round of voting in the Jakarta governor poll.  (Photo by Goh Chai Hin/AFP)

Catholic and Protestant leaders have called on Christians in Jakarta to vote in the highly charged April 19 run-off poll for city governor, with latest opinion polls showing the Christian incumbent pulling ahead of his Muslim rival.

Governor Basuki Tjahaja Purnama, popularly known as Ahok, had previously trailed his rival, former education minister Anies Rasyid Baswedan, in the run-up to the poll which is being looked upon as a test of religious toleration in the Muslim majority nation.

Ahok’s supporters and political observers had blamed extremists for exploiting religious sentiments to try and stop Muslim voters backing the Christian governor who is also of Chinese descent. Ahok is currently on trial after being accused of blasphemy following a campaign speech last September. Opponents have used the blasphemy charges to try and derail his bid for a second term.

Last week most opinion polls had Baswedan leading with about 49 percent while Ahok had 43 percent.

However, in what would appear to be a dramatic turnaround a recent poll conducted by Charta Politika had Ahok as the frontrunner with 47.3 percent, with Baswedan on 44.8 percent.

With the election looking to go to the wire Catholic and Protest leaders called for Christians to exercise the right to vote and expressed hope the winner would concentrate on social welfare that would include all people regardless of religious background.

"The Catholic Church hopes the winner will promote social policies for all people of Jakarta," Archbishop Ignatius Suharyo Hardjoatmodjo of Jakarta told reporters on April 16.

"Power should be used to promote social welfare and the people’s right to worship is an example," he said.

The government has failed to protect this right," he added, referring to the refusal by some local authorities to issue building permits for Christian churches.

Members of two Protestant churches, the Yasmin Indonesian Christian Church from Bogor city and the Batak Society Christian Church (HKBP) of Philadelphia in Bekasi have been holding services outside the presidential palace for the last five years amid disputes over church building permits. 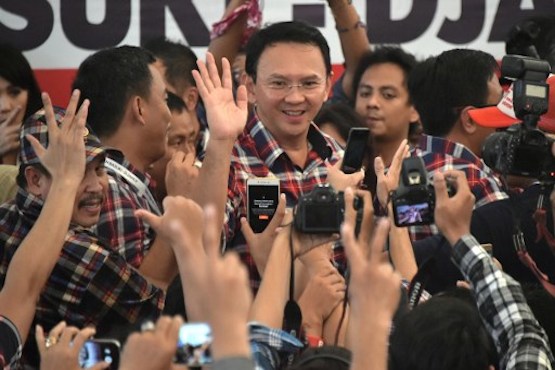 Reverend Gomar Gultom, general secretary of the Communion of Churches in Indonesia, also called on all eligible Protestants to vote in the Jakarta poll.

"This is the responsibility of your faith," he said.

Protestants, he said, should vote for a candidate serving people and "never get influenced by promises."

He also stressed the importance of religious freedom.

"I call on all parties to prioritize the national interest by upholding the unity of all social elements in plural Jakarta," he said.

He also called for all people to accept the election results.