Modern life, a lack of religiosity among young people and migration to cities threaten the survival of Boithaki Gaan About 3,000 Catholics, from children to the elderly, thronged to Our Lady of Lourdes Church in Bonpara in Bangladesh's Natore district to attend the annual feast of Mother Mary.

As the feast day Mass ended on Feb. 12, the crowd flocked to the area just outside the church to attend the Boithaki Gaan (assembly music) performance by two Catholic troupes from Our Lady of Lourdes Church and St. Francis Xavier Church.

For about two hours, the two 15-member groups delivered emotional performances with religious and spiritual music based on stories from the Bible, including the creation, the fall of Adam and the life and death of Jesus, that enchanted the audience.

“God made Adam by clay, made statue of Adam, blew into his nose, breathed life into him,” a troupe started singing to the accompaniment of drums, flute, harmonium and clapping.

As the musical episode progressed before an entranced audience, one troupe sang about how the Archangel Gabriel approached Mary to announce that Jesus would be born from her womb.

The performance in Bonpara, some 220 kilometers north of Bangladeshi capital Dhaka, was sponsored by church authorities. It was an attempt to revive a nearly dead Christian folk music tradition that was once widely popular among Bengali Catholics in Dhaka Archdiocese and Rajshahi Diocese.

Traditionally, Boithaki Gaan used to be sung in Christian villages during religious feasts like Christmas in Bhawal district of Dhaka, one of the country’s largest and oldest Catholic settlements.

Christian men and women used to sit on a mat in a circle on the ground and sing songs with drums, harmonium and clapping. The musical event ended with performers and the audience eating locally prepared Christmas cake.

Often, the group made door-to-door visits to get blessings for elders and as a gesture of greetings and solidarity with neighbors.

The songs’ lyrics are in a Bengali dialect spoken by Catholics in Bhawal and northern Bangladesh. Initially, the songs started as an oral tradition. In the 1940s, Peter Dominic Rozario, a Catholic catechist-teacher from St. John the Baptist Church in Gazipur of Bhawal, composed the songs along with 17 other religious folk plays and devotional songs.

The tradition was shared with Bengali Catholic parishes in Natore and Pabna districts when thousands of Catholics from Bhawal migrated to the north about a century ago.

Komol Gregory, 67, leader of a Boithaki Gaan troupe, said he has been proudly following the ancestral tradition.

“My father’s ancestral house was in St. John the Baptist Church in Gazipur and my father and others brought these songs with them. Boithaki songs are spiritual and are a form of prayer and spirituality, especially during Christmas,” Gregory told UCA News.

The songs have a greatness in spirit that nourishes the soul and must be preserved, he said.

“When I was a child, I used to go to different houses with my father and uncles and sing these songs. Now we are probably the last generation to carry on this tradition. We are trying wholeheartedly to revive these songs for the next generations. We need to encourage and organize our new generations for this tradition,” Gregory added. 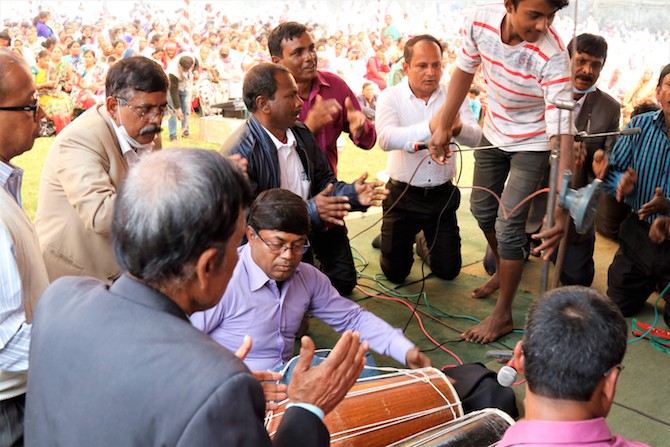 Amid busy modern life, a lack of religiosity among the younger generation and migration to cities for education and jobs, the tradition of Boithaki Gaan is dying slowly, lamented Robert Corraya, 50, a Catholic farmer from Our Lady of Lourdes Church.

“During my childhood, although I didn’t understand the songs, I joined with other children in a group. I could not sing but I would clap my hands and pray and eat cake. It allowed me to understand the greatness of Christmas,” Corraya recalled.

It is a pity that the boys and girls of the present generation do not have any basic knowledge of singing these songs as they are more inclined to modern-day entertainment, he said.

“We have talked to the priest and have plans to stage a performance at least once a year in front of thousands of Catholics in order to encourage the new generation to learn and keep alive this musical tradition. We can also organize it in villages too,” Corraya added.

The program on Feb. 12 came as a cultural shock to 23-year-old Sumon Costa, a university student in Dhaka.

“For the first time I listened to Boithaki songs. When I heard the words of the songs, the sound of the drum, the melody of the flute, all at once, my mind and my body became excited,” Costa told UCA News.

Costa wants to learn about this musical genre and vowed to hold it “in the heart.”

Our Lady of Lourdes Church, part of Rajshahi Diocese, has held the annual Boithaki performance for two years with an aim to preserve the glory of the musical tradition.

Similar efforts must be taken by churches in various places, said Father Patrick Gomes, a senior priest, musician and former secretary of the Catholic bishops’ Commission for Liturgy and Prayer.

“Boithaki songs behold the tradition and identity of Bengali Christians who have roots in the Bhawal region. It is a beautiful way of spreading the Word of God among ourselves and other religions,” Father Gomes told UCA News.

“This beautiful tradition in which Christian families sing the praises of God together should be preserved. It is our responsibility to sustain it.”