In rural areas of Laos, Christians are routinely victimized by other villagers for their faith, Christians say 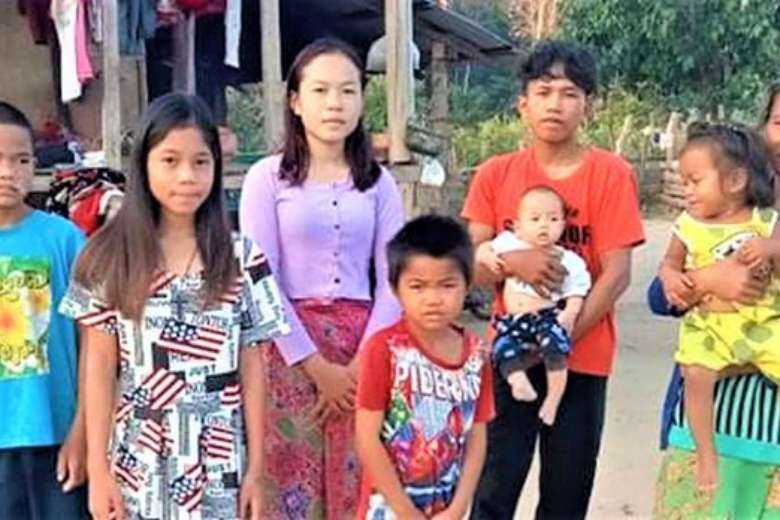 Members of the Christian family attacked in Dong Savanh village in Savannakhet province of Laos. Many Buddhists in Laos view Christianity as an alien faith. (Photo: RFA)

A Christian family in southern Laos have been attacked and forcibly displaced from their home by Buddhist villagers allegedly angry over what they called the practice of a “foreign religion.”

Family members and local sources said 12 members of the family in Dong Savanh village in Savannakhet province were driven out of their home following an attack on Feb. 9, Radio Free Asia reported on Feb. 23.

The assault left their home burned to the ground, forcing family members to flee the village and shelter with relatives.

Seng Aloun, a widow and head of the family, said the attack was the latest in a series of assaults on the family in recent times.

She said that when her husband died last December, the villagers refused to allow his burial in the village cemetery.

“My husband died on Dec. 4 last year, and we took his body to the village cemetery two days later, but the villagers wouldn’t allow us to bury him there. They struck his coffin with wooden sticks and hit my family members too,” she told RFA.

Village residents and local authorities don’t like us because we believe in Jesus Christ. They don’t want us here. They say they don’t like the religion of a foreign country

“Later, we buried my husband’s body on Dec. 7 in our own rice field. But the villagers then burned down my home on Feb. 9 and seized our rice field the next day. They just want to get rid of us.”

Seng Aloun recalled that the family were evicted from the village once before in 2017. “Village residents and local authorities don’t like us because we believe in Jesus Christ. They don’t want us here. They say they don’t like the religion of a foreign country.”

Police from Phalanxay district of Savannakhet visited the family members to inquire about the burning of their home and seizure of their rice field. Seng said police told her to remove her social media posts and videos describing the latest attack and the earlier assault on her husband’s funeral.

A government official said authorities have been investigating the case but brushed off a religious motive behind the violence.

“Our initial information is that this is a personal conflict, not a religious one,” the official said. “We are now looking for the person or persons who burned the family’s home, even if they are authorities in the village. Whoever did the burning will be punished according to the law.”

Meanwhile, other Christians in Savannakhet voiced concern over the treatment of Seng Aroun and her family, noting that the Dong Savanh village chief had joined in the Dec. 6 attack on her husband’s funeral, leaving two family members injured.

One Christian said local authorities should help the family to get back their land so that they can work on it. However, this is unlikely. “They really don’t like us,” the Christian said.

However, many Buddhists, especially in rural areas, view Christianity as an alien faith. Christians are routinely victimized, harassed and expelled by other villagers

Laos, a tiny Buddhist-majority communist nation in Southeast Asia with estimated population of 7 million, has a national law that allows freedom of religion.

However, many Buddhists, especially in rural areas, view Christianity as an alien faith. Christians are routinely victimized, harassed and expelled by other villagers.

In October 2020, authorities in Ta Oy district in Saravan province in southern Laos evicted seven Christians and destroyed their homes for allegedly refusing to renounce their faith.

In March that year, Christian leader and pastor Sithon Thippavong at Chonnabouly district in Savannakhet province was arrested for refusing to sign a document renouncing his Christian faith. He was released after spending one year in prison on charges of “disrupting unity” and “creating disorder.”