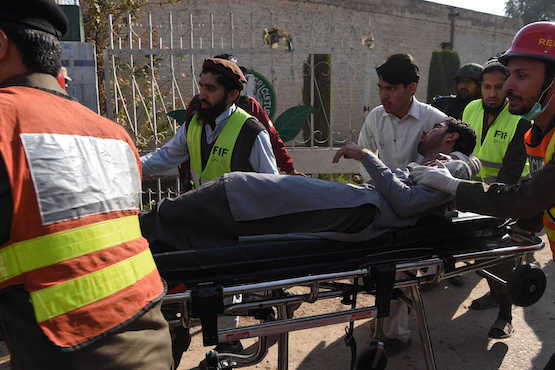 Pakistani volunteers move an injured student from an agriculture training institute after an attack by Taliban militants in Peshawar on Dec. 1, 2017, which left nine dead and dozens injured. The next day a boy, 7, was killed in an attack on a Christian colony in Baluchistan. (Photo Abdul Majeed/AFP)

A bomb went off at the main gate of a Christian colony in the Pakistani city of Chaman on Dec. 2, killing a 7-year-old boy and two others, police said, the latest incident of violence in the restive southwestern province of Baluchistan.

"It was a hand grenade which caused the explosion at the colony's gate," Gul Mohammad, a police officer, told English daily Dawn. "The blast also smashed windows in nearby homes," he said.

The Christian boy killed in the blast has been identified as Lucky Saleem, according to the police officer.

The injured were rushed to the Chaman Hospital for medical treatment.

A Taliban faction claimed the responsibility of the attack and said that Peshawar Agriculture Institute was a safe house for intelligence officials.

Both the terrorist attacks happened as Muslims were celebrating Milid Milad-un Nabi (the birth anniversary of Prophet Muhammad.)

In a press statement, Baluchistan Chief Minister Nawaz Sanaullah condemned the blast and expressed sorrow at the loss of innocent life.

He directed the authorities to ensure best medical care for the injured.

The chief minister ordered the security forces to apprehend those terrorist elements involved in the terrorist attack.

"Christians live in scattered communities across the biggest province and are rarely attacked. The attack has raised concerns for the safety of churches especially in Christmas gatherings. We are in close contact with locals of the attacked colony and praying for the affected families", William told ucanews.

In recent months, Baluchistan, which shares a large border with Afghanistan and Iran, had been raked by a series of violent attacks from both separatist groups and Islamist militants.

On Nov 15, Mohammd Ilyas, a senior police officer, his wife, son and grandsom were killed when gunmen attacked their vehicle in Quetta.

A month earlier, five members of minority Shia community were killed in a drive-by shooting.

At least 20 migrant workers who were trying to sneak into Iran on their way to Europe were gunned down by a separatist group in the province last month.

In multiple attacks last year, over 180 people many of them lawyers and security officers were killed in Balochistan.