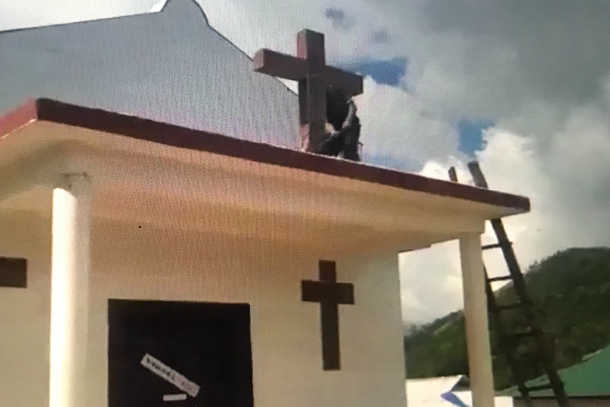 The cross on this church in Shan State in Myanmar was destroyed by soldiers from the United Wa State Army. (Screen grab from video on social media)

The China-backed United Wa State Army (UWSA) has destroyed unauthorized churches, detained pastors and closed religious schools in the area under its control in Myanmar's Shan State near the Chinese border.

Myanmar's largest armed ethnic organization has clamped down on Christian churches since Sept. 13, according to church sources.

A Catholic priest said the UWSA also checked Catholic churches and schools and detained four teachers for questioning, but they were released two days later.

"It appears that they are concerned about several churches [mostly Baptist] that had sprung up unofficially. They are also checking whether schools might try to persuade people to convert to Christianity," the priest told ucanews.com.

"They know the Catholic Church's activities as we never try to convert people to Christianity."

Undated videos appearing to show UWSA officers destroying crosses, demolishing a new church and sealing off a church went viral on Facebook and Twitter on Sept. 19.

The UWSA instructed all its military officers and administrators to find out what missionaries were doing and what were their intentions, according to an Asia Times report.

All churches built after 1992 would be destroyed as they had been built illegally. Only churches built between 1989 and 1992 are legal, the army said in a statement.

It pledged to punish any local administration cadres who support missionary activities, it banned the construction of new churches and requires that priests and workers in churches must be local, not foreign.

It also bans religious teaching in schools in the Wa Hills area, while UWSP functionaries are no longer allowed to be members of any religious organizations.

Nyi Ran, a UWSA communications official at the army's office in Lashio, Shan State, told Radio Free Asia that Wa leaders believe there are religious extremists in Wa territory, including missionaries who have not obtained official permission and clergy members who are operating outside the law.

Lashio Diocese that covers Wa region was not officially informed by the UWSA about the clampdown, according to church sources. The region has five Catholic churches.

The Wa region is home to ethnic groups including the Wa, Kachin, Ta'ang, Lahu, Lisu, Kokang and Shan who observe Christianity, Buddhism, animism, spirit worship and Islam. Christians comprise around 30 percent of the estimated 450,000 Wa.

Some observers believe that China is behind the UWSA move. Beijing sees missionaries as tools of Western influence among Myanmar's ethnic minorities, several of whom, such as the Wa, have Christians among them.

Chinese officials also view Western non-government organizations, especially those that are faith-based, as rivals seeking to influence Myanmar's peace process or even as foreign agents.