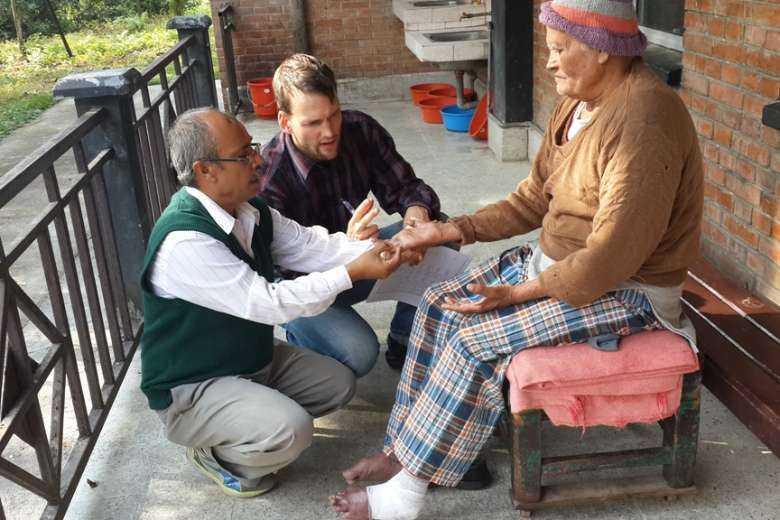 More than a decade after Nepal's government declared that leprosy had been eliminated, Christian charities continue to battle a disease that is still prevalent in the Himalayan nation.

The Lalgadh Leprosy Hospital and Services Center (LLHSC) is a major treatment facility for leprosy patients in southeast Nepal, where cases are still high, reports Missions Box, a news portal covering the services of non-profit groups and faith-based groups that help the needy.

Every year LLHSC serves about 87,000 patients, offering free treatment and medication. It treats about 35 percent of newly recorded cases in the country, the report said.

The hospital, run by UK-based Christian charity Nepal Leprosy Trust (NLT), has six doctors, including five Nepalese, and more than 100 nurses and paramedics.

The charity was set up by British nurse Eileen Lodge in 1972 following her years of work in Nepal. She also led the establishment of the Lalgadh Leprosy Hospital in 1993. The land for the hospital was provided by Nepal's government.

“Many of our patients have been deeply affected by rejection and loss, and they find the caring atmosphere at LLHSC such a contrast to what they have known that they do not want to leave. Some literally have no place to go and have become semi-permanent residents — not in the wards but in other accommodation arranged for them,” the group stated.

In Nepal families and communities often isolate and abandon leprosy patients, and in rural areas people consider the disease a curse from God as a punishment for sins

The Lydia project mostly trains disadvantaged women who produce a variety of fabric and greeting cards.

The products from Khola and Lydia are exported to countries including the UK, US and Japan, while the profits from sales are directed to social enterprises of the NLT in Nepal.

The NLT has also formed self-help groups that carry out campaigns for stigma and poverty reduction and health improvement in rural areas.

Similar efforts to tackle leprosy in Nepal are carried out by leading Christian charities such as The Leprosy Mission International (TLM), Damien Foundation and American Leprosy Missions Nepal.

TLM runs Anandaban Hospital in Lalitpur, the third-largest city in Nepal. It treats hundreds of patients each year and has 25 satellite clinics that provide extensive leprosy services in high-prevalence areas where people cannot go to hospital for diagnosis and treatment.

It also operates Green Pastures Hospital and Rehabilitation Center in partnership with International Nepal Fellowship in Pokhara, about 200 kilometers west of capital Kathmandu.

For decades, leprosy was known as an infectious, bacterial and potentially disabling disease causing social stigma in impoverished countries like Nepal.

In Nepal families and communities often isolate and abandon leprosy patients, and in rural areas people consider the disease a curse from God as a punishment for sins, media reports say.

In 2000, the World Health Organization declared that leprosy had been eliminated as a public health problem after global prevalence rates fell below one case per 10,000 people. Nepal's government declared elimination in 2010 and claimed the rate had fallen to 0.77 per 10,000 people.

This misnomer has contributed to the current situation in which leprosy is on the increase. A national active case-finding program is urgently required

However, health experts described the declaration as misleading. It led people to believe leprosy was eliminated amid fears that hundreds of cases go undiagnosed and unreported in the country. It also reportedly caused a defunding of some government and non-government leprosy projects.

In an article for the Journal for Public Health Policy last year, Frank Houghton and Michael Winterburn said leprosy in Nepal was “a re-emerging threat” and criticized the declaration of its elimination in 2010.

“This misnomer has contributed to the current situation in which leprosy is on the increase. A national active case-finding program is urgently required,” they wrote.

In the past nine years, some 3,000 new leprosy cases were detected in Nepal annually, the Himalayan Times reported last year, referring to the state-run Epidemiology and Disease Control Division. Some 3,282 new cases were recorded in the country in the last fiscal year, it added.

Globally, 202,256 new leprosy cases were registered in 2019, according to the World Health Organization.

Leprosy is curable today with multidrug therapy if detected at an early stage. Untreated, it can cause progressive and permanent damage to the skin, nerves, limbs and eyes.