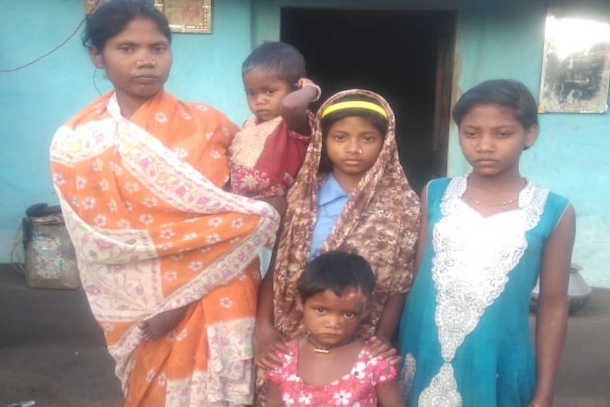 Sukhbati Gand with her children in a photo taken before her husband Anant Ram Gand was found murdered in India’s Odisha state. He had been given an ultimatum to renounce Christianity or face death. (Photo supplied)

A Christian man has been found virtually beheaded in an interior village of India's Odisha state in what family members and many others believe was an anti-Christian attack.

They dismiss a police claim that he was killed by politically motivated Maoist rebels.

The body of 40-year-old Anant Ram Gand, father of four girls and a boy, was on Feb. 11 found on a road in Bhenas village of Nabarangapur district, local pastor Chandan Jani told ucanews.com.

Pastor Jani said the victim's throat was cut and his head had been crushed by a heavy object. "He seemed to have died unmoved from the spot of attack," said the evangelical pastor, who helped the widow to bury his body.

He said news of the killing took more than a week to become more widely known because the area where the murder took place is extremely isolated.

Gand and his family had accepted faith in Jesus three years ago but local Hindu villagers applied pressure for him to give up his Christian faith. That included forcing the family to live on the outskirts of the village and at times he was manhandled.

"But yet they continued in faith," the pastor said.

A week before the vicious attack, seven people from the village had given Gand an ultimatum to renounce Christianity or face death, said the pastor, who has remained in contact with the family.

Pastor Jani said police had registered it as murder carried out by outlawed Maoists active in the hilly area of the state.

The Maoists, who clash with authorities in their attempts to establish a parallel administration in outlying areas, kill villagers suspected of aiding the security forces.

Pastor Jani said the Maosts were clearly not involved in this case and it was obvious that fellow villagers murdered Gand.

However, it was easier for police to avoid having to conduct a proper investigation and pursue court proceedings against village Hindus by falsely blaming the Maoist rebels, the pastor said.

Another local pastor, P.S. Nakul, told ucanews.com that Gand's wife Sukhbati is continuing to be placed under tremendous pressure from her own family to quit being a Christian. "She is the only one from her family who adopted Christianity," he said.

According to Pastor Nakul, the victim's family are determined to continue in Christian faith until death.

Gand's six-year-old son was present at the time of his murder and he is the only eyewitness. The family has moved out of the village as they face ongoing threats to their lives.

The boy is the most vulnerable as he could inform police of what he saw and possibly testify in court, the pastor said.

Hostility toward Christians continues in many parts of the state, which witnessed India's worst anti-Christian violence in August 2008 when frenzied Hindu mobs armed with axes and swords attacked Christian homes, churches and convents in the hilly Kandhamal district.

Violence that continued for seven weeks resulted in an estimated 100 people being killed. About 350 churches and some 6,500 houses were looted and burned, making 56,000 people homeless. Several rapes were reported, including that of a Catholic nun.

Gand's village is several hundred kilometers further into the interior from Kandhamal.

Church leaders say that persecution of Christians has been on the rise in India ever since the pro-Hindu Bharatiya Janata Party came to power nationally in 2014. The BJP also holds power in 19 of the nation's 29 states.

Persecution Relief, an ecumenical forum monitoring violence against Christians, in its annual report released recently said Indian Christians suffered 1,059 incidents of violence in 2018, up from 736 in 2017.