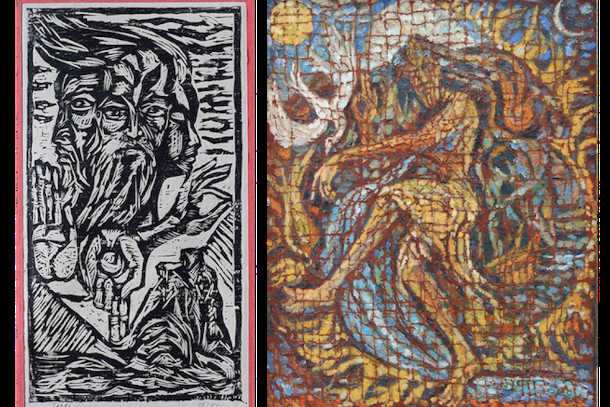 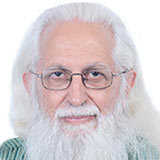 This is the second part of Christian artist Jyoti Sahi's reflections on the place of art in the process of "inculturation" in the Indian Church:

Traditional Christian art seems something of the past that does not offer any new insights. More recently inculturated art forms from Asia and Africa have been appreciated because they are thought to bring a fresh perspective on Biblical themes.

As an artist, I have not represented Jesus in the conventional way that is typical of certain kinds of Church art or Bible illustration in Europe. However, this often has been unappealing to Indian Christians who have become used to the art forms imported from the West. For some, such images represent an alternative identity that is liberating.

India's “Sanskritised” culture is associated with an oppressive tradition that marginalized all other cultures that were not part of it. It becomes unacceptable to most Indian Christians to use ideas and symbols of this dominant culture to present the "liberating" message of Christ.

There is another aspect to this. Creative imagination and artistic processes are concerned with the spiritual but can never become dogmatic. Art communicates with the experiences of each individual and can never make categorical statements about faith or spirituality. We can speak of the Spiritual in art, but that is very different from making statements of systematic theology. In other words, art is a personal experience of the artist and of each viewer in a reflective and meditative way. It is not about dogmatic statements. It is an effort to make the Gospels relevant in the present context.

Let me explain the problem of approaching inculturation as an evangelical technique, to convert people to Christianity, with an example. Missio, an international Catholic mission society based in Germany, put up an exhibition of my artwork some years ago. At the exhibition, a visitor asked me: "How many people have you converted to Christianity through your art?" The question surprised me. I admitted truthfully, that as far as I knew, nobody had become a Christian because of my art. "Then, you are a complete failure," the visitor told me point blank and shot another question: "Why is Missio interested in your art?" I was rather taken aback but responded by saying: "I do feel my art has a mission, but it is a mission to encourage Christians to be more open to other Faith experiences." 'Road to Emmaus' by Jyoti Sahi

Another dimension of faith

I want Christians to be open to another dimension of faith, which is not about adding people to become members of the Church. But rather, they need to be open to dialogue, to be more concerned with inner spirituality. I am afraid many Indian Christians would not consider this as an appropriate view.

I have spent the last 30 to 35 years studying what I would term "primal faith systems." Ram Dayal Munda (1939-2010), former vice-chancellor of Ranchi University, called it an "Aadi Dharma." He argued that the majority of Indians belong to this Aadi Dharma. This would include a folk sense of religion or an Adivasi (aboriginal) spirituality. Folk religion is not anything to do with Sanskritised culture. It is a primal worldview that feels that the sacred is found in every form of life. I have called it sometimes a "secular spirituality." It has seen the sacred in a tree, stone, or in a termite hill.

Christian missionaries often misunderstood this sense of the sacred with what they called “animism” or “pantheism” or idolatry. Theologian Raimondo Panikkar (1918-2010) called this approach to the Sacred "panentheism" which sees a distinction but a relationship between God and creation — a sacred presence in the world of nature and human culture. It recognizes an immanent spiritual life in all the forms of being that are around us. It is the basis for what some call an eco-spirituality.

It is this form of spirituality that I am hoping to express through my art, and that makes me nervous about the terms "Indian" or even "Christian" for that matter. I believe that this is the basis of spirituality that St. Francis introduced, and which Pope Francis talks about in his encyclical Laudato Si. For me, it is the essential meaning of the Gospel, and what Jesus meant when he explained the Kingdom of God through poetic parables. As Hans Kung said, unless faith becomes more spiritual, there is no future for religion on this earth.

My faith is very important to me, and central to my art. I'm amazed by the richness of the Biblical teaching, of which Jesus was very much a part. My main difficulty has been to explain my art, particularly in the context of the Indian Church. And yet, I have been deeply grateful to many people who are part of that Indian Church who have supported me. My art and perception of the creative process would not have grown without such support.

The institutional Church in India has often looked at my work with suspicion. However, ironically, because the global Church in organizations like Missio and Misereor, continued to support my work. However, the Indian Church has not called me a heretic. I am grateful for those who have felt that I can in some way contribute to an Indian theology.

Some people have said that they do not understand my art. However, I do not think my art is "difficult" to understand if people are willing to accept the spiritual in art.

This article is an extract from an interview by Michael Gonsalves with Jyoti Sahi. You can read the first part here