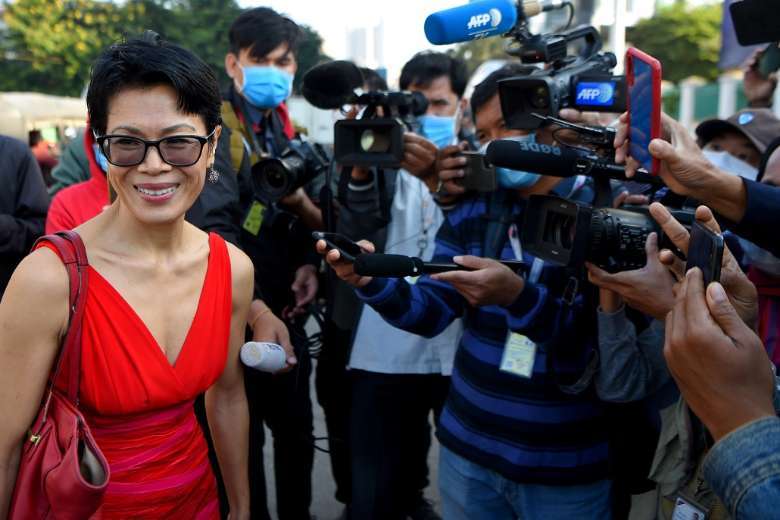 Rights advocate Theary Seng smiles as she walks in front of Phnom Penh Municipal Court on Jan. 14 during a mass trial against more than 100 opposition members and activists charged with conspiracy to commit treason related to self-exiled opposition figurehead Sam Rainsy’s failed plan return to the country in 2019. (Photo: AFP)

A prominent Christian and pro-democracy activist has appeared in court as Cambodia’s mass trials of dissidents and supporters of the outlawed Cambodian National Rescue Party (CNRP) and its leader-in-exile Sam Rainsy resumed.

Theary Seng, whose work includes editing the Khmer version of the Bible, has been charged with conspiracy to commit treason after backing a failed bid by Sam Rainsy to return home in November 2019, when he planned to stage widespread protests.

Her appearance alongside 41 people accused of similar charges was brief on Dec. 7.

“The violations against me and the many others on trial reflect Cambodia’s long and ungraceful fall from the promises it made to serve and protect its people,” she said before entering Phnom Penh Municipal Court.

“It is a descent that has not just been felt by Cambodians but also observed and documented by the international community.”

She is among 139 people who are being tried in two batches of 42 and 97 and face up to 12 years in prison if convicted on charges of treason and incitement. Pro-democracy advocates and rights groups have condemned the charges as politically motivated.

The CNRP was dissolved by the courts in late 2017 after a spate of violent anti-government street demonstrations, which enabled the long-ruling Cambodian People’s Party (CPP) to win every seat contested at elections the following year.

Theary Seng — a Cambodian-American — appeared in court with her head shaved, which she said was done to mourn the loss of Sin Khon, a CNRP youth activist who was murdered by a group of men armed with knives two weeks ago.

She was initially involved with the “nine fingers” campaign, a gesture which represented Nov. 9, 2019, the day Sam Rainsy had promised to return from self-exile in France. It became a popular salute among his supporters in Cambodia.

The return was thwarted after international airlines barred Sam Rainsy from boarding. In March he was slapped with a 25-year jail term for an alleged plot to overthrow the government. Protests are now a rare event in Cambodia and Prime Minister Hun Sen has warned he “will do what it takes” to crack down on protests over the coming year when Cambodia plays host as chair of the Association of South East Asian Nations.

The World Justice Project recently ranked the Southeast Asian country second from bottom in its Rule of Law Index 2021 comprising 139 countries. Authorities here said the ranking was unfair and did not reflect the reality on the ground.

Legal sources said further hearings for the second batch of defendants will be held on Dec. 9 and they expected a joint verdict for all 139 accused will be announced on March 8 next year.