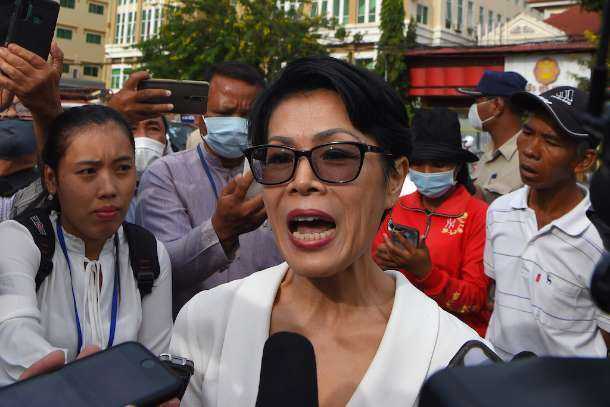 Some 129 Cambodian dissidents went on trial at Phnom Penh Municipal Court amid tight security and small crowds of supporters wearing face masks who gave them a thumbs-up.

Most were members or supporters of the banned Cambodian National Rescue Party (CNRP) and have been charged with treason, which carries a jail term of up to 12 years.

The Nov. 26 hearing was short, with judges acknowledging the heavy caseload and dividing cases into two separate hearings scheduled for January and March next year.

Speaking outside the court, prominent activist Theary Seng said she was charged with treason after backing a bid by opposition leader Sam Rainsy, who lives in self-exile, to return and arrest Prime Minister Hun Sen.

That attempt last November was thwarted after Hun Sen warned neighboring counties and airlines they would be aiding a rebellion if they allowed Sam Rainsy access to Cambodia.

A devout Christian, Theary Seng said she had spent most of her time in recent years in publishing, which included work on the Khmer translation of the Bible.

“I have been quiet, relatively speaking ... I have translated, edited and punctuated 59 books of the Bible in Khmer, and many I have revised three times or more,” she told UCA News.

But she added she was prepared to go to jail, adding Hun Sen’s threats “only made me want to advocate the return some more, which I did,” and she described the court proceedings as a “kangaroo court”.

As leader of the CNRP alongside Kem Sokha, Sam Rainsy went close to winning national elections in 2013 and refused to accept the result while claiming the poll had been rigged.

Violent protests persisted for a year before the government initiated a crackdown. Kem Sokha was detained and charged with treason while Sam Rainsy, among many others, fled Cambodia and the CNRP was dissolved by the courts.

Despite residing in France, Sam Rainsy has sought to remain a viable political force in Cambodia and still insists he will come back, take charge and rescue Cambodia from one-party rule.

Outside the court one CNRP supporter, an elderly woman who declined to give her name, insisted the opposition leader would come back, chanting in Khmer “Sam Rainsy will return” as the political dissidents entered the courtroom flanked by lawyers and security guards.