Year of special events kick off to celebrate Bangladesh milestone Holy Cross Archbishop Moses Costa marks the start of “Year of Mission 2018” designated for the 500-year jubilee of the arrival of Christianity in the then East Bengal (now Bangladesh) at Our Lady of the Holy Rosary Cathedral in Chittagong, Bangladesh on Dec. 10. (Photo courtesy of Chittagong Archdiocese)

Chittagong Archdiocese in southeastern Bangladesh has launched yearlong celebrations to mark 500 years of Christianity in the country.

Holy Cross Archbishop Moses M. Costa kicked-off the "Year of Mission 2018" designated for the special year at Our Lady of the Holy Rosary Cathedral Church in Chittagong during Sunday Mass on Dec. 10.

Eleven parishes and two sub-centers also marked the opening of the special year on Dec. 10.

"Today, we remember the great contributions of the first missionaries, Father Francesco Fernandez and Father Dominico D’Souza. In these 500 years of our journey of faith, the church has been blessed with the service of 18 bishops, hundreds of men and women from 27 religious orders and many lay missionaries and catechists," Archbishop Costa said.

"We also pay tribute to missionaries Fr. Fransesco Fernandez, Fr. Andre Bovis and more than 600 Christians martyred in 1602, 1607 and 1625 in Chittagong. We are fruits of their missionary lives," he told the gathering.

Archbishop Costa also issued a pastoral letter to all parishes and outstations in the archdiocese for the "reflection, discussion, and "catechism" of Catholics for their "renewal of faith" during the year.

Chittagong played a significant role in the growth of Christianity in Bangladesh.

In 1517, Portuguese Christian traders landed at Chittagong port of East Bengal (now Bangladesh). From 1518-1597 Chittagong was part of Goa Diocese of India.

In 1845, Chittagong became the seat of first East Bengal Vicariate and the territory was entrusted to Dhaka Diocese in 1886. Chittagong Diocese was created in 1950 and was elevated to an archdiocese on Feb. 2, 2017 with Moses Costa as the first archbishop. 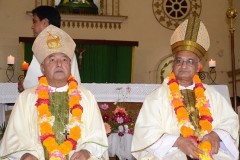