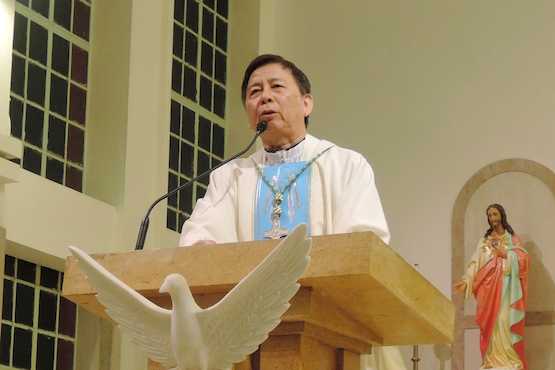 Archbishop Savio Hon delivered a homily during Mass for the World Prayer Day for the Catholic Church in China while he made a home-visit in Hong Kong on May 24. (ucanews.com photo)

Archbishop Savio Hon Tai-fai, 65, the top Chinese official at the Holy See, has been appointed apostolic administrator of Agana in Guam as the local bishop comes under investigation over a sexual abuse allegation.

The latest appointment made by Pope Francis was announced June 6, two days after his latest motu proprio, which provides  new norms for the removal of bishops from office when they are negligent in dealing with sex abuse cases.

Archbishop Hon told ucanews.com that the role as "administrator" is considered an added service to his current position. The appointment as administrator went into effect as soon as it was published and that no ordination is needed.

"The priority of this mission is to restore unity and harmony of this local church," Archbishop Hon said in an email sent from Seoul while on his way to Guam.

"The Holy Father kindly asks for the trust and prayers of the local church and sincerely hopes that the entire Catholic community will put all its energy in promoting unity, harmony, and stability of the church," he wrote.

The statement further explained that an apostolic "sede plena" means that Archbishop Apuron remains the head of Agana while he is discharged from pastoral duties.

The archbishop is under investigation of allegation that he abused a former altar boy and a now-deceased son of an Arizona woman in the 1970s. The archbishop denies the claim.

The Archdiocese of Agana in the northwestern Pacific Ocean is an American territory where the population is around 184,000 with 157,000 of them being Catholic.