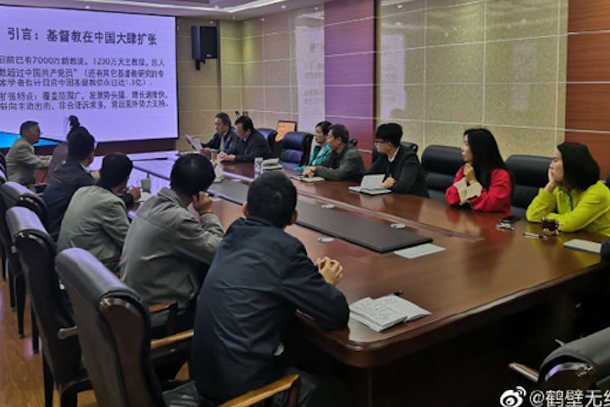 A telecommunications agency in Henan province has told its Chinese Communist Party (CCP) members that Christianity is harmful to the nation.

Religious experts believe it is a sign that the party is tightening its control on ideology and mobilizing different departments to make joint efforts to manage religions.

The Hebi Municipal Radio Administrative Bureau in Henan announced on its official WeChat account on April 24 that it had held a seminar for party members with the title "The Great Harm of Christianity to the Security of the Chinese Nation" following the rapid expansion of Christianity in the country in recent years.

It said the seminar was to help members correctly understand Christianity and prevent the occurrence of ideological deviations. However, the WeChat message was deleted only two days after it was released.

Many people thought that the message reflected the CCP’s hostile attitude towards Christianity and emphasized the importance of ideology.

Professor Ying Fuk-tsang, director of the divinity school at the Chinese University of Hong Kong, said the propagation of religions involves telecommunications and internet networks, and the seminar reflected the increasingly stringent controls on ideology in China.

Ying told ucanews.com that in recent years the CCP has tended to adopt an approach of comprehensive social management "through non-religious ways to deal with religious issues and therefore it is no longer a single religious department to manage religion, but the joint effort of different departments to manage all around."

He said the CCP’s atheist attitude has always tried to exaggerate the negative nature of religion, especially by linking it to national security issues. He believes that President Xi Jinping is highlighting the threat of religion to China.

Ning Keren, a Chinese Catholic, told ucanews.com that the seminar was based on an article published by state media in 2012 that was in the context of the Cultural Revolution without any new ideas.

Another Catholic who gave his name as Paul told ucanews.com that although the Radio Administrative Bureau has no direct relationship with religion, it has inextricably linked business relations with national security agencies. "It surely is a monitoring agency for serving national security."

He said the CCP is hostile to religion in its DNA, especially to Christianity. "It fears that the number of Chinese Christians exceeds the number of party members and poses a threat to its one-party dictatorship," he added.

As Henan has a dense population believing in religions and with Protestantism developing rapidly, the CCP feels it is losing control of religions and is targeting them in the province, Paul said.